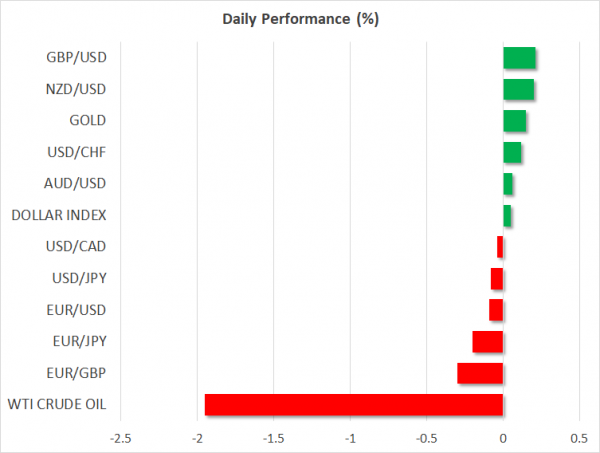 Global markets buckled under the weight of the new shutdowns in Europe yesterday, with the newfound uncertainty around the US election making matters worse. The straw that finally broke the camel’s back was France and Germany announcing a new set of nationwide measures to battle the spread of the virus, which threaten to derail the fragile recovery and throw the Eurozone into a double-dip recession.

US equities fell a whopping 3.5% as investors trimmed their risk exposure, while defensive plays like the Japanese yen and the US dollar shined bright. The new restrictions are not quite as strict as the lockdowns in March, so the hit to economic growth will likely be smaller, but that also means less fiscal assistance to cushion the blow this time.

Adding salt to the wound, the US election has entered its final stretch and opinion polls suggest the race has tightened, with Florida now being a virtual tie. Everyone is therefore waiting with bated breath to see if President Trump can pull a new rabbit out of the hat and deliver another upset, even if his path to victory is still narrow. That is likely keeping some players on the defensive as the closer the race is, the higher the odds of a contested election.

The atmosphere is calmer on Thursday, with futures pointing to a ~1% higher open on Wall Street, but the FX market is saying this episode is not quite over as both the yen and the dollar continue to edge higher. Overall, it is difficult to envision any meaningful recovery for now, with next week’s election casting a long shadow. However, once that risk is out of the way investors may reconsider all the gloom, depending on the outcome of course, especially if infections stop accelerating.

Besides stocks, the main losers from yesterday’s rout were the commodity-linked currencies. The loonie in particular suffered a triple whammy of risk aversion, sinking oil prices, and a cautious-sounding Bank of Canada.

Gold prices fell victim to the turmoil as well. Bullion dropped below the $1900 region, demonstrating once more that it is not a safe haven during this particular crisis but rather a risky asset. Essentially, the US dollar is the new gold, as it is the reserve currency that has acted like a true defensive asset since March.

While the US election may dictate bullion’s path for now, the longer-term case for gold seems intact as the bigger forces are still at play. The world will remain flush with ultra-cheap money for years and fiscal discipline is probably dead for good.

ECB: Are dovish signals enough to sink the euro?

The main event today will be the ECB meeting. The central bank is expected to hold off from introducing more stimulus, but in light of the new lockdowns and the growing risk of a double-dip recession, President Lagarde will likely prepare the ground for more action in December.

The question is, will that be enough to torpedo the euro today? The markets already expect Lagarde to telegraph a move in December given the deflationary supernova that is about to hit the euro area, and in fact, some players may even anticipate some surprise action today given how quickly the situation has deteriorated.

The implication is that yes, Lagarde may strike a dovish tone, but that might not be enough to bring the euro down. Of course, the overall outlook is still grim.

On the data front, the highlight will be third-quarter GDP data in the US, but absent a major surprise, this might be overshadowed by the bigger issues at play.