Dollar Firms, Stocks Rattled As US Election Too Close To Call 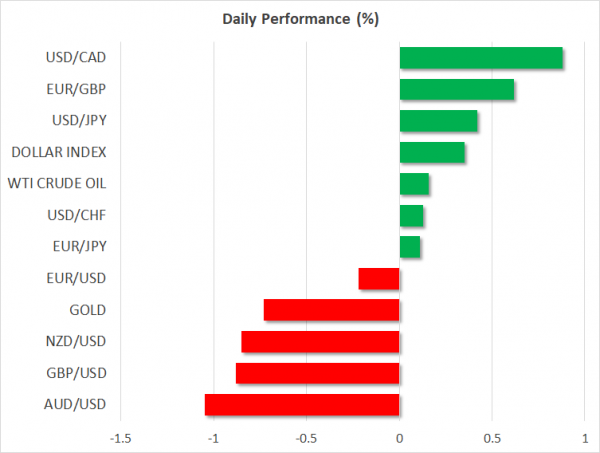 Trump closes in on Biden; might be a long wait

The race for the White House is proving tighter than many had anticipated and certainly more than what the opinion polls had indicated as incumbent President Trump wins in several battleground states. As of 09:00 GMT, Trump had secured the swing states of Florida, Ohio and Texas and trailed Biden by just 25 electoral college votes.

Joe Biden’s lead is likely to narrow further in the coming hours. However, with millions of postal votes yet to be counted, the final result may not be known until Friday. The danger, though, for the markets isn’t the extended wait to find out who will be the next President of the United States but the strong possibility of the Trump team challenging the counting of mail-in votes in the Supreme Court.

In a White House press briefing earlier today, Trump prematurely declared victory and claimed that the inclusion of postal ballots received after Tuesday would be “a fraud on the American public”. His comments sent US and European stock futures plunging, which until that point, had been edging higher despite the predicted looming legal battle.

If there is no clear winner in the next few hours and Trump goes ahead with his legal threat, the final result may not be called for several weeks if not months. Such a scenario would potentially cause a prolonged period of paralysis in Washington and uncertainty in financial markets.

But investors appear to be trying hard not to jump to any dramatic conclusions just yet as futures for the S&P 500 and the Nasdaq Composite quickly bounced back from their dips, with only Dow Jones futures staying in negative territory.

The mood in Europe, however, was much more subdued and major bourses opened lower on the prospect of another term of Donald Trump at the White House.

But it’s not just about the presidential race as winning control of the Senate is also proving a tough challenge for the Democrats. Treasury yields fell sharply across the curve as the continuation of the status quo of a split Congress would make it less likely that another large fiscal stimulus package would ever be approved.

The 10-year yield had earlier spiked to a 5-month high on expectations that a blue wave sweep would push up US government borrowing.

But fading hopes of more fiscal stimulus weren’t the only thing driving demand for Treasury notes as investors also sought their safety amidst the rising political uncertainty. Haven currencies such as the US dollar and the Japanese yen also benefited from the anxiety generated by the closely contested election.

The greenback briefly brushed a more than one-month high against a basket of currencies before easing slightly, while the yen rallied sharply against risk-sensitive currencies such as the pound, aussie and the kiwi.

All three currencies were also under pressure versus their US counterpart, slipping by more than 1%. The euro fared slightly better, holding flat against the yen and down 0.4% versus the dollar, as it found support from an upward revision to the October services PMIs for the Eurozone.

The Markit services PMI is also due in the US later today, along with the IMS non-manufacturing PMI and the ADP employment report. However, with counting still underway across America, much of the focus will remain on the election and investors should brace themselves for some further bouts of volatility. 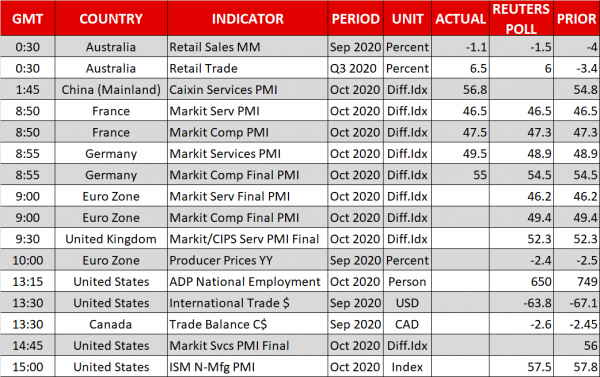