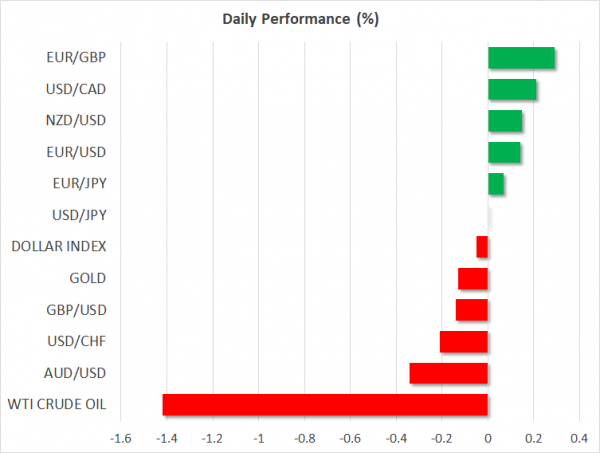 The US presidential election remains an open race as counting enters day four, though the odds appear to be moving in favour of Joe Biden. The Democratic nominee is projected to win the key states of Nevada and Arizona but has also been making inroads in the battleground states of Georgia and Pennsylvania, with incumbent President Trump seeing his leads narrow significantly.

But whilst the next few hours could prove decisive for the world of politics, financial markets seem to have already settled for the prospect of Biden as president and a Republican-controlled Senate. It wasn’t that long ago when such a composition was seen as the worst-case scenario by investors as it would diminish the chance of either big tax cuts or a generous fiscal stimulus package.

A split Congress not such a bad thing for equities

However, political gridlock on Capitol Hill does bring with it some advantages. For one, it would make it difficult for the Democrats to press on with their agenda of higher taxes and increased regulation. The receding fears of tax hikes and regulatory curbs for America’s tech giants has been fuelling the post-election rally on Wall Street and in stock markets around the world.

Investors also appear to have overcome their disappointment that the next virus relief bill is unlikely to match the CARES Act in size. But there’s little doubt that the Fed would not step in with monetary stimulus to compensate for the lack of fiscal action if needed even as Fed officials are reluctant just yet to commit to any new measures.

US stock futures headed lower on Friday as traders paused for breath after four days of impressive gains that pushed the S&P 500 up by more than 7% and the Nasdaq Composite by almost 9%. European shares were mostly negative, trailing a mixed session in Asia where the Nikkei 225 stood out for hitting a 29-year high.

FX markets were also calmer as currencies that had trounced on the US dollar’s pullback this week eased away slightly on Friday. The greenback was trading flat against a basket of currencies, while the yen was mixed.

But although substantial fiscal stimulus may now be off the table, markets are anticipating further easy money by central banks around the world and this is likely to keep gold prices supported over the coming months. Gold slid today but held close to yesterday’s 6½-week high, having gained more than 4% since the end of October.

The RBA and the Bank of England both increased their asset purchases this week and the ECB is expected to the same next month. So there was some disappointment that the Fed offered no fresh clues on future stimulus after keeping policy unchanged yesterday as expected.

Fed Chair Jerome Powell talked down the prospect of any major changes to its existing stimulus in his press conference and only hinted that they will decide in December on whether to extend the various emergency lending facilities.

Still, the Fed’s current pace of purchases of $120 billion per month is significant and is unlikely to be scaled back anytime soon. However, policymakers may yet be forced to do more if the US recovery falters.

The country recorded its highest daily tally of new COVID-19 infections on Thursday, topping 116,000 cases, and the resurgence in Europe also continues to get only worse.

So far, the US economy is proving more resilient than its European counterparts and the October nonfarm payrolls report due later today is expected to confirm this. Nevertheless, any negative surprises in the report could help change this narrative.