In the UK, retail sales volume continues to decline. In November, volume fell by 25%, after falling by 23% in the previous month. However, sales volume is expected to stabilize once lockdown restrictions ease.

BoE Governor Andrew Bailey has warned that a no-deal Brexit would be more damaging to the UK economy than the Covid-19 pandemic. Bailey made the comments in testimony before a parliamentary committee on Monday. Brexit negotiators are racing against the clock to reach an agreement, with the UK withdrawing from the EU on January 31st. Trade between the sides totals GBP670 billion annually, and if a trade deal is not reached, the UK economy will certainly experience a downturn. There are media reports that a deal is very close to being inked, but nothing is a given in the world of Brexit. On Monday, the EU’s chief Brexit negotiator, Michel Barnier, warned that “fundamental differences” still remain.

The BoE has projected that the UK economy will contract by 11% this year, and another blow to the ribs in the form of a no-deal Brexit would deepen the economic downturn and likely send the pound to lower levels. On Sunday, Finance Minister Sunak also had a somber message, saying that the “economy is experiencing significant stress”. Sunak is scheduled to deliver an update on the economy on Wednesday, and his message could affect the movement of GBP/USD. The pound has somehow shrugged off these dire warnings, as the currency continues to head higher, and has gained 3.1% in November. 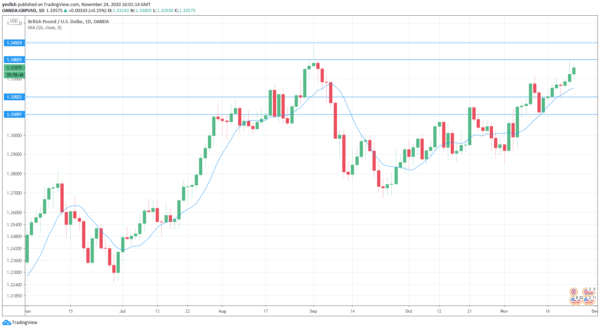