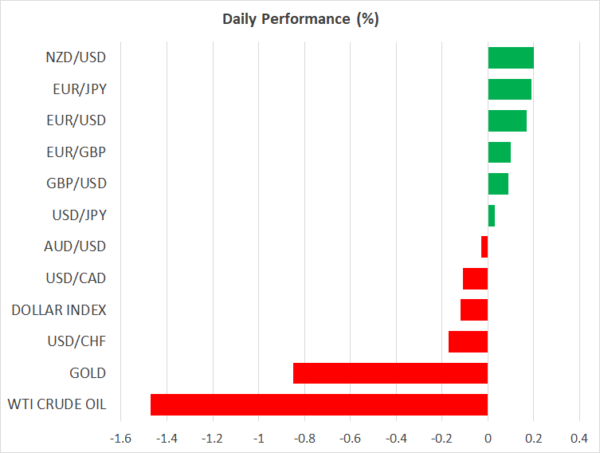 There was no end in sight to the US dollar’s losing streak at the start of the new trading week as the greenback brushed more than 2½-year lows against a basket of currencies. With the vaccine news giving long-term economic prosperity a shot in the arm and expectations that the Federal Reserve will have to prop things up in the interim with additional stimulus, the US currency has seen its safe-haven appeal fade significantly over the last month.

Expectations that the Fed will have to boost its asset purchases have been steadily rising in recent weeks amid signs of a stalling recovery in the United States and the threat of another fiscal cliff approaching at year-end in the absence of a stimulus deal in Congress. Fed policymakers have so far been holding their cards close to their chests about whether or not fresh policy action is imminent in December. However, Fed chief Jerome Powell may get his last chance to telegraph the central bank’s next move at the two-day Congressional hearing on Tuesday and Wednesday before the blackout period begins at the end of the week.

Investors will also be keeping a close watch on the November jobs report due Friday for any clues that the spiralling virus cases and accompanying tighter restrictions dented the rebound in America’s labour market, as a disappointing headline figure would add fuel to Fed easing bets.

Stocks step back from highs

Global equities look set to end the month with record gains even as shares were mostly in the red today as the incredible vaccine-led rally paused for breath. Asian stocks were unable to hold on to earlier gains made on the back of upbeat manufacturing PMI data out of China, and most major European indices opened in negative territory. US stocks futures were down too, though the Nasdaq was attempting to claw back some gains.

However, as COVID-19 vaccines head towards regulatory approval, there’s still plenty of juice left in the stock market rally and the prevailing risk-on mood was underlined by a broad pullback of the Japanese yen today. The United Kingdom could become the first country to approve Pfizer-BioNTech’s vaccine and that could be one reason why London’s FTSE 100 was outperforming its peers on Monday. The other is Brexit.

A Brexit deal this week?

Positive rhetoric in the Brexit negotiations is supporting British assets today, with the pound edging slightly higher against the dollar, though it was marginally down versus the euro. The UK’s foreign minister, Dominic Raab, described this week as “very significant” over the weekend, hinting that the talks could run into early next week if there is sufficient progress. Fishing rights is thought to be the last major hurdle and it may yet scupper a deal.

The euro was also in a perky mood on Monday as it aimed to close in on the $1.20 level. The single currency’s bullish drive comes despite strong expectations that the European Central Bank will ease monetary policy further next week and an ongoing row over the EU budget that risks delaying the block’s virus rescue package.

Other currencies were less buoyant against the US dollar, with the aussie slightly down and the kiwi flat.

Oil prices drifted lower as the OPEC and non-OPEC group of countries met to discuss whether to extend existing output cuts beyond December. Initial hopes that the alliance would agree on a long extension of up to six months have been dashed as most reports point to a compromise ranging between two and four months amid some members, including Russia, being keen to raise production soon.

Both WTI and Brent prices were down sharply but managed to come off earlier lows, finding support from the improved demand outlook following the positive vaccine developments. WTI was last 1.5% lower and Brent crude by almost 2%. 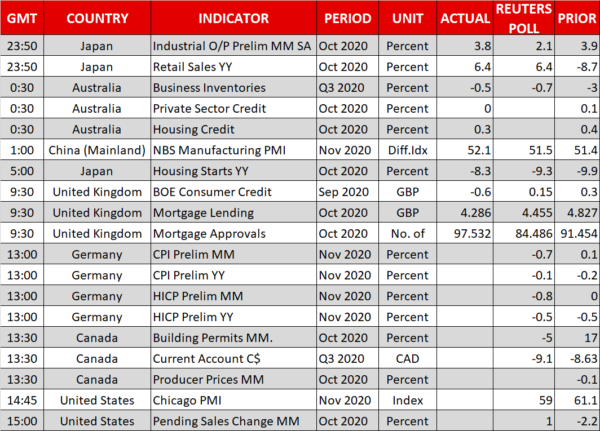