The Swiss franc is showing some volatility this week. After starting the week with gains, USD/CHF has surrendered those gains in the Tuesday session. Currently, USD/CHF is trading at 0.9055, down 0.36% on the day.

Most major economies have rebounded in impressive form in Q3, after sustaining sharp contraction in the second quarter. The Swiss economy followed this trend, posting a strong gain of 7.2% in Q3, surpassing the estimate of 6.0%. This erased most of the 8.2% decline in the previous quarter. The Swiss economy had posted a rare recession this year, with negative GDP readings in the first and second quarters. The last time this occurred was in 2009, during the global financial crisis. Switzerland has coped better with the Covid-19 pandemic better than most European countries. Still, the country’s GDP remains 2% below its pre-pandemic level at the end of 2019.

There was more positive news from the manufacturing front. Manufacturing PMI showed a strong improvement in November, climbing from 52.3 to 55.5. This was much stronger than the consensus of 51.5 points. The PMI was below the neutral 50-level in the first half of the year, which indicates contraction. However, with economic conditions improving, the PMI has remained in expansion territory for four straight months. As well, the November reading was the strongest since February 2019, another sign that the Swiss recovery is gaining steam. One area which hasn’t shown any improvement is the inflation front. CPI has been stuck at the zero level for five of the past six months, and analysts are projecting a decline of 0.1% in December. The CPI data will be released on Wednesday (7:30 GMT). 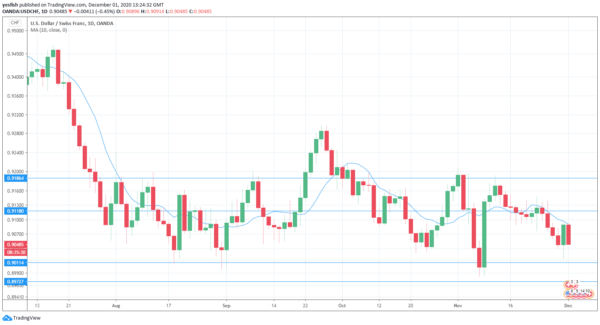