The 0.4% increase in GDP in October was above the the 0.2% advance estimate released almost a month ago. But the larger surprise was the preliminary estimate that November output rose another 0.4% despite ramping up of COVID-19 containment measures. Even allowing for a potential decline in December in what will be, for most, a very different holiday season, that leaves Q4 GDP growth tracking significantly above the Bank of Canada’s (and our own) last forecasts for a 1% increase. October and November output averaged 6% (annualized) above the Q3 average.

Lockdowns during the second wave of COVID-19 spread have been heavily targeted at industries like accommodation & food services and entertainment/recreation, both of which were still running far below pre-shock levels in October (-31% and -44%, respectively) and almost certainly fell again in November. 45% of the remaining shortfall in employment relative to pre-shock levels came from accommodation & food services sector alone in November.

But the recovery outside of the hard-hit travel and hospitality sectors has continued, even if at a slower rate. Manufacturing output fell 0.8% in October, but was flagged by Statistics Canada as a main driver of November growth. The manufacturing sector has been less impacted by containment measures in the second wave, both in Canada and abroad. Global trade in goods has continued to show signs of improvement. Non-essential retailers have also been closed, but overall spending appears to have held up relatively well with more e-commerce infrastructure in place than in the spring and big-box stores still open in most regions.

The beginning of vaccine roll-out has brightened the light at the end of the tunnel for pandemic-weary households and businesses. But there are clearly still risks to near-term growth depending on virus spread with lockdowns intensifying again in December. At least for the near-term, the economic recovery will continue to be limited by virus spread and containment measures. 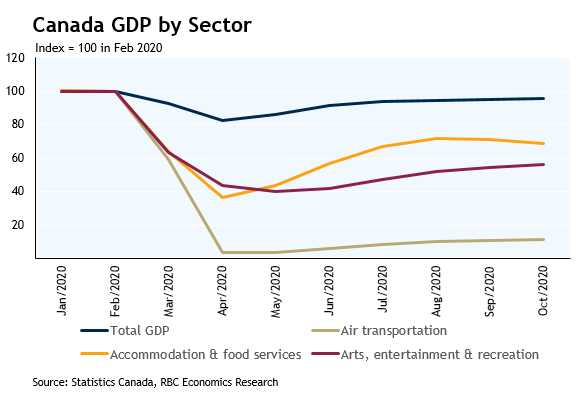 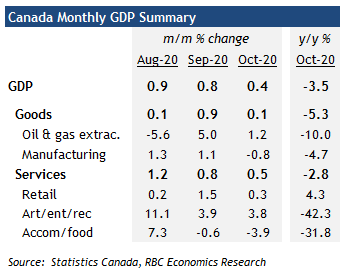