The Swiss franc has been relatively quiet in the second half of January. USD/CHF is almost unchanged on Friday, trading at 0.8880.

The KoF Economic Barometer, a key indicator of business confidence, has started the new year in very poor form. The index fell to 96.5 in January, down sharply from 104.3 in the previous release. The soft reading caught the markets by surprise, as the consensus estimate stood at 102.2. The KOF barometer has dropped below its long-term average of 100 for the first time since July. The sharp decline can be attributed to a resurgence in Covid, which has led to weaker conditions in the manufacturing and services sectors. The Swiss central bank (SNB) would love nothing more than the Swiss franc to depreciate, as the Swissie surged in H2 of 2020. Unfortunately for bank policymakers, investors have shrugged off the gloomy economic news and the Swiss franc remains almost unchanged after the KOF release.

Earlier in the week, another Swiss indicator pointed to weakening economic conditions. Credit Suisse Economic Expectations, which gauges confidence levels amongst institutional investors and analysts, slowed to 43.2 in December, down from 46.8 beforehand.

Over in the US, the only releases are tier-2 events, with an expectation for subdued numbers. On the consumer front, Personal Income has struggled, with three declines in the past four releases. A weak gain of 0.1% is expected for December. Personal Spending posted its first decline in seven months in November, at -0.4%. An identical gain is expected in the December release. The Core PCE Price Index, which is believed to be the Fed’s preferred inflation gauge, has been stuck at zero for two successive months and is expected in at 0.1% in the December release. 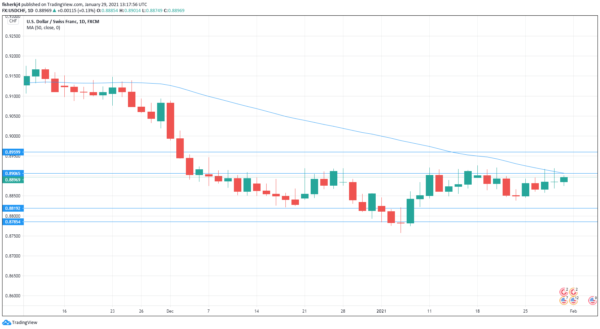