The Canadian economy (outside of the hospitality sector) continued to show resilience through the second wave of lockdowns as households and businesses adapted to tighter restrictions. The more narrowly imposed containment measures this time around, which left the industrial sector and other businesses outside the hospitality and retail sectors largely untouched, also helped.

Manufacturing is one industry that has been less-severely impacted by the second wave of lockdowns with sales gradually converging back towards year-ago levels. Our estimate is that manufacturing sales grew by 1.2% in December (faster than StatCan’s preliminary estimate of 0.6%), supported by a 15% increase in petroleum prices as well as gains in most other sectors. Early PMI reports suggest that growth moderated, but remained solidly positive, in January.

Retail sales have been impacted by new containment measures, but have remained resilient relative to the collapse in the spring. After falling 2.6% in December (as previewed by StatCan’s flash estimate) we expect sales to have dipped again in January with in-store shopping prohibited in much of the country. Increased use of online sales and curb-side pick-up appear to have significantly softened the blow compared to the earlier shutdowns.

And there are few signs that the blazing hot housing market is ready cool. Early reports from local real estate boards pointed to double-digit increases in resale volumes in January. And we expect the national report next week to tell a similar tale.

Near-term data has left some upside risk to our Q1 tracking of zero output growth. Containment measures have already started to ease as virus spread slows. Whether this will continue will depend on the pace and effectiveness of vaccine roll-out. On that front, deliveries are scheduled to accelerate sharply in coming weeks as production disruptions from Pfizer/BioNtech have eased. The federal government is looking for a total of 6 million doses of Pfizer/BioNtech and Moderna vaccines to be received by the end of March. 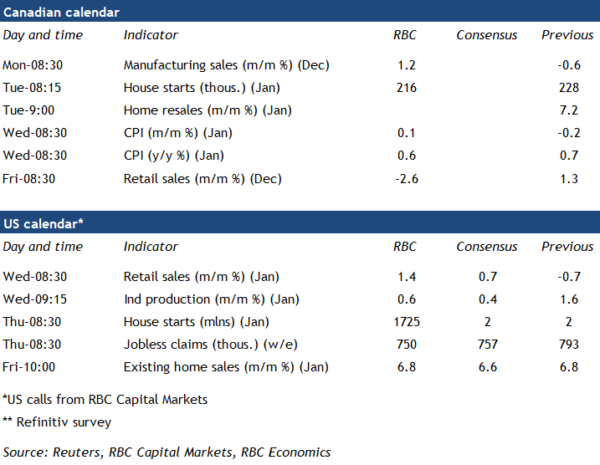