The New Zealand dollar has posted small gains in the Tuesday session. Currently, NZD/USD is trading at 0.7313, down 0.22% on the day.

The New Zealand economy has looked strong, with most key indicators pointing upwards. However, investors were in for a rude surprise on Tuesday, as retail sales reports for Q4 in 2020 showed a much sharper contraction than anticipated. Headline retail sales came in at -2.7% and the core reading at -3.1%. The street consensus stood at -0.5% and -0.6%, respectively. However, on a year-to-year basis, Q4 retail sales were actually up by 4.8%. Investors were not too concerned about the declines, as the New Zealand dollar has been in positive territory for most of the day. Earlier in the day, NZD/USD touched a high of 0.7341, its highest level since April 2018.

The RBNZ holds its monthly policy meeting on Wednesday and will release a rate statement (1:00 GMT). The central bank is expected to keep interest rates at 0.25%, where they have been pegged since March. This week’s S&P upgrade of New Zealand’s sovereign rating to AA+ from AA has impressed investors and given a boost to the sizzling New Zealand dollar. The upgrade is also good news for the RBNZ, which will allow it to attract new international investors as it continues to purchase government bonds. The S&P note announcing the rating upgrade praised New Zealand for its successful containment of Covid-19 and said this was a major reason for the strong economic recovery. At the same time, S&P did mention two areas of concern in the New Zealand economy – a possible weakening of the housing market and high household debt. 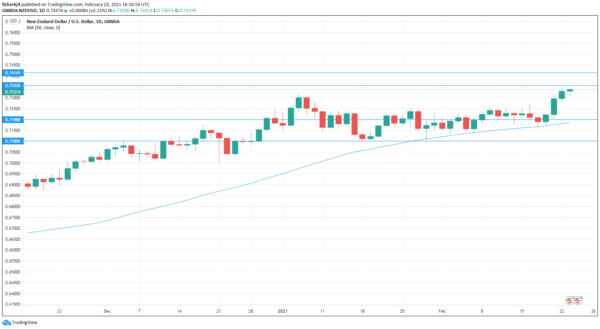