The Swiss franc has started the trading week and the month of March in negative territory, as the currency’s downswing continues. USD/CHF is currently trading at 0.9141, up 0.63% on the day.

The Swiss franc remains in a prolonged downswing against the US dollar. The Swissie has lost 3.6% of its value so far this year, and the currency fell 2.1% in February, its worst month since April 2019. Although Covid-19 remains a significant problem, investors are encouraged by the significant progress of the vaccine rollouts. Global economic growth is expected to recover in 2021, and risk sentiment for investors has risen considerably since the dark days of 2020, when Covid was running rampant, practically unchallenged. This has made the Swiss franc, a reliable safe-haven asset, less attractive to investors willing to take on risk.

The Swiss economy, which relies heavily on exports, should also benefit from a stronger global economy this year. The economy tends to expand at an annual clip of 1.7%, but the government has forecast growth of between 3% and 4% in 2021

The week ended with mixed numbers, and the US dollar continued its upswing unhindered. The KOF Economic Barometer jumped to 102.7 in February, up from 96.5 beforehand. This strong reading easily beat the forecast of 96.5. Switzerland’s GDP slowed to a negligible 0.3% in Q4 of 2020, down from 7.2%. However, it should be kept in mind that the 7.2% came after a sharp decline of -8.2%. Earlier in the week, Credit Suisse Economic Expectations jumped to 55.5 in January, up from 43.2 beforehand. This is a significant reading, as a reading over the neutral-50 level indicates optimism on the part of financial experts.

On Monday, Swiss data has been mixed. Retail Sales contracted by 0.5% in January, its first decline in nine months. On a positive note, the manufacturing sector remains a bright spot. Manufacturing PMI improved to 61.3 in January, which is well into expansionary territory. 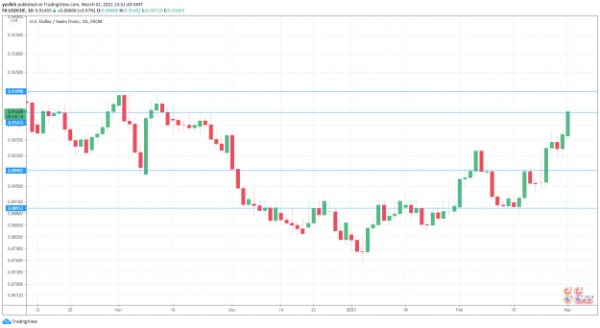