We look for next week’s Canadian employment report to show that the 2-speed labour market persisted in February with travel and hospitality services remaining exceptionally weak while other sectors continue to grow. We expect roughly 75K jobs returned in February after January’s 213K plunge as the gradual easing in containment measures allowed for a partial recovery in retail employment after a 100k+ pull-back in January when stores in much of the country were closed to in-store purchases.

The single greatest remaining headwind to job growth is virus risk and containment measures. On this front there has been some good news with the pace of vaccinations set to increase. For some of the hardest hit industries, this will allow them to begin to reopen and hire back some of their workers over the spring and summer. Large government supports have meant that household incomes remained robust despite the weakness in the labour market – including through the second wave of job losses in December and January. Household disposable income rose 10% last year and Canadians increased savings by over $210 billion. Not all of that savings will be spent immediately, but the Q4 national balance sheet accounts (also out next Friday) will reinforce that households are coming out of the pandemic with substantially more purchasing power than normally would be the case following a recession. We look for spending on services to recover as rapidly as containment measures ease, and this is needed in the hardest hit sectors of the labour market like hospitality which account for more than 2/3 of the remaining (massive) 860k total employment shortfall relative to pre-shock levels. 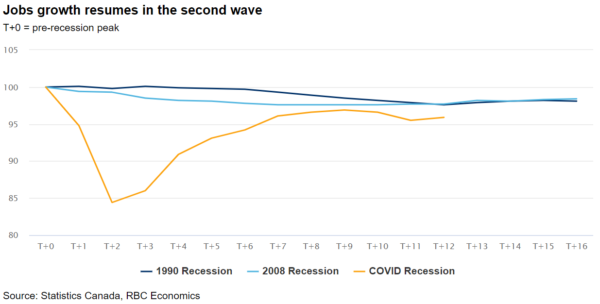 Despite the string of recent positive news released (GDP, hours worked, building permits, etc.) we continue to expect the Bank of Canada to remain on the sidelines and maintain their stance that the policy rate remains appropriate for the current environment. No change to the bank’s asset purchase program is expected with policymakers likely to hold off tapering the pace of asset purchases (QE) until the next meeting in April.

United States CPI for February is expected to lift higher on account of higher commodity prices. We look for base effects from the COVID shock to put upward pressures on this index in the coming months.

The pace and effectiveness of vaccine distribution continues to be a critical factor of economic growth expectations beyond the very near-term. Efforts are ongoing to ramp up the pace of vaccination in Canada. AstraZeneca’s approval will add 24M doses in the next 6months. Mass vaccinations have begun to be rolled out across the country, focusing on those above 80 years old initially. National medical experts have now advised that the 2-doses required Pfizer and Moderna vaccines can now be given 4 months apart. BC has already endorsed this strategy. If nationalized, Canada will have enough to vaccinate 25+ population with at least one shot each by July. 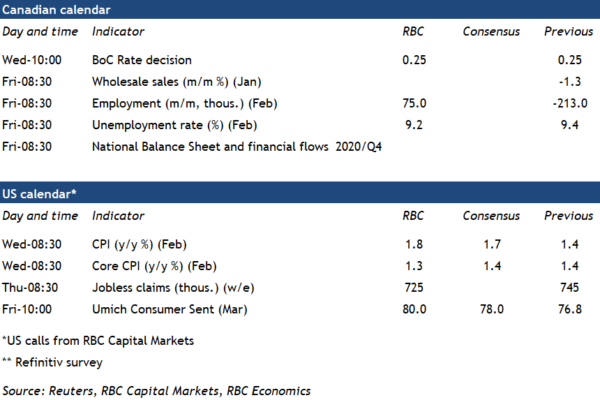