The easing in virus containment measures in much of the country in February led to a quicker-than-expected rebound in employment. The February jobs gain was concentrated the retail trade and accommodation & foods services industries. Restrictions continued to ease into March, particularly for large parts of Ontario, meaning job gains probably continued this month as well.

Employment continued to rise outside of the hard-hit hospitality and retail sectors. Most industries continued to post job growth through the second wave of virus spread and containment measures over the spring. Part-time jobs accounted for 70% of the increase in employment in February, although hours worked still rose by 1.4%, adding to a 0.9% increase in January and flagging if anything additional upside risk to early 2021 GDP growth numbers even with recent upgrades.

Labour market has by no means recovered. An 8.2% unemployment rate is still very high, and the level of employment is still down 600k from year-ago (pre-shock) levels. But the travel and hospitality sectors are increasingly massively over-represented in that shortfall. Three industries – accommodation & food services, info/culture/recreation services, and ‘other’ services account for 80% of that total jobs shortfall as of February. Job weakness also continues to be heavily concentrated at the lower-end of the wage scale where government income supports are relatively larger. Employment was 418k below pre-shock levels among people who were previously earning $500/week or less. 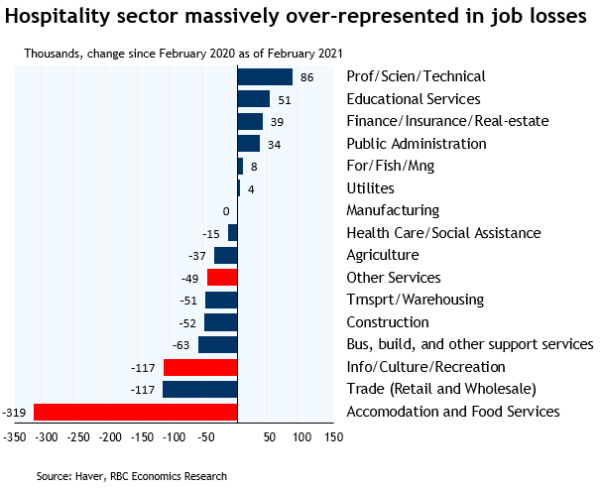 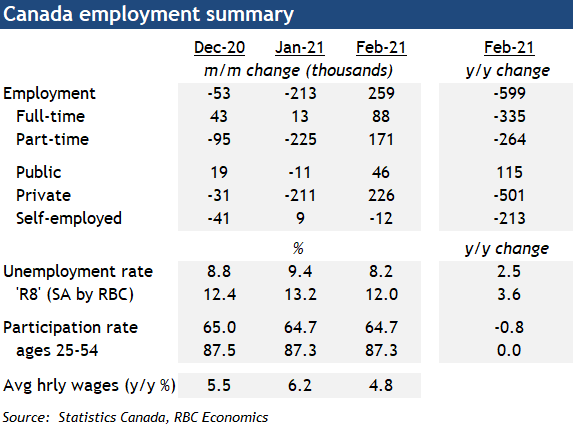