BoE Could Strike A Dovish Tone, But Traders Won’t Buy It

After Wednesday’s policy decision by the Fed and previously the ECB, I wouldn’t be surprised if the Bank of England also tries to be more dovish than the markets are currently expecting today. But will the bond markets call the BoE’s potential bluff in the same way? Indeed, benchmark 10-year bond yields in the US and Germany have hit new weekly highs this morning despite the Fed and previously the ECB trying to calm investor apprehension. It is either that investors in the bond markets are expecting policy tightening quicker than the Fed and other major central banks are projecting, or the fact that Jay Powell said there is no reason to push back against the rise in Treasury yields is giving investors the green light to keep selling bonds. Whatever the reason, rising yields could come back to haunt equity market investors even if right now they are not showing much concern. But insofar as today is concerned, keep a very close eye on the pound as FX traders could send the pound initially lower on the back of a potentially less hawkish BoE before probably buying the dip as UK yields resume higher.

The Bank of England won’t be changing rates today but it’s tone and guidance will be key as far as the outlook for the pound and UK stocks are concerned. The BoE will try and calm speculation that the potential for a quicker recovery will mean the end of QE or higher rates, similar to how the Fed’s Jay Powell attempted to calm investor concerns on Wednesday. There has certainly been an improvement in UK’s economic outlook since the Bank’s last meeting, owing to the government’s rapid Covid vaccination response and huge fiscal spending programmes both at home and abroad. The drop in GDP in January was less than expected and we had a fiscal easing in the budget with furlough support also being extended.

So, policymakers at the BoE will almost certainly be expecting higher rates for economic growth and inflation than they were previously projecting. Indeed, the BoE’s Chief Economist Andy Haldane has warned about inflation, saying a “tiger has been stirred” that may “prove difficult to tame.”

Still, that won’t be enough to cause the nine-member Monetary Policy Committee (MPC) to call for a change in policy. The MPC is very likely to vote unanimously to keep interest rates at a record low 0.1% and the asset-purchase target at £895 billion.

Overall, the BoE’s stance is going to be similar to the Fed than ECB. The latter responded last week with a pledge to accelerate the pace of its asset purchases. Given the recent speeches by some of BOE’s policy makers, it looks unlikely that the UK central bank will want to follow suit and accelerate the pace of bond buying in the face of rising yields.

Thus, the yield spread between the U.K. and Eurozone bonds is likely to widen in response to the BoE’s policy decision today and this should put further downward pressure on the EUR/GBP cross: 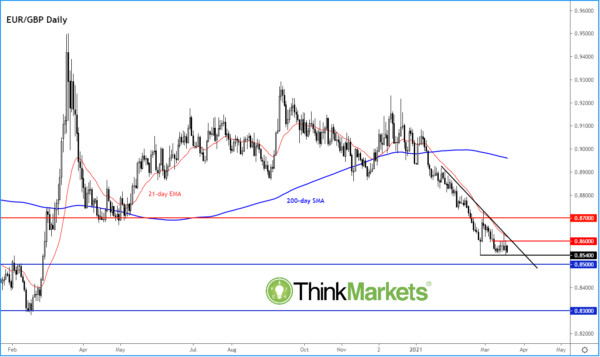 Meanwhile, Norway’s Norges Bank will make its latest announcement later too, before the Bank of Japan decides on policy Friday.

On Wednesday, the US Federal Reserve continued to project near-zero interest rates through at least 2023 in a dovish move that sent the dollar tumbling and stocks soaring, before both trends reversed somewhat at the start of today’s session. Fed Chair Jerome Powell stuck firmly to a dovish message, repeatedly stressing interest rates won’t rise until there’s tangible evidence the economy has fully recovered from the pandemic. He said: “The stance of monetary policy we have today we believe is appropriate,” adding that rather than worrying about rising bond yields he “would be concerned by disorderly conditions in markets or by persistent tightening of financial conditions that threaten the achievement of our goals.”

Despite a dovish Fed, US bond yields have risen to new highs on the week, with UK yields also being on the rise ahead of the BoE policy decision: 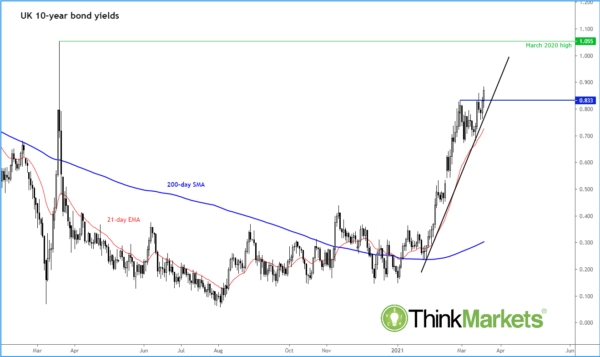