The USD tended to gain against most of its counterparts as uncertainty on the fundamentals along with US yields tended to be on the rise. It was characteristic that riskier assets such as commodity currencies and emerging economy currencies tended to suffer while US equities were dropping, with the tech shares taking a hit as Nasdaq dived lower. US yields were on the rise with the 10-year yield spiking above 1.70 for the first time since January 2020, fuelled by higher inflation expectations. Especially after the Fed’s meeting such expectations peaked as it was mentioned that a higher inflation than the Fed’s target was to be tolerated. Also, it should be noted that the weekly initial jobless claims figure rose instead of dropping raising worries for the US employment market once again, while the Philly Fed Business index widely outperformed market expectations for March on a more positive note. On a fundamental level the situation seems to be worrying given that the US-Sino relationships have experienced new tensions during high level negotiations in Alaska between the two parts, while a second round of talks is scheduled for Thursday. Tensions seem to also have spiked in the US-Russian relationships as President Biden in an interview agreed that the Russian President Putin is a “killer” sparking an intense response from the Kremlin. The new US administration seems to kick off its foreign policy rather aggressively and that could create substantial uncertainty in the markets about the international trading conditions and the global economic recovery.

AUD/USD retreated yesterday, surrendering most of the gains made in the past days form the Fed’s dovish stance. The pair dropped from the 0.7840 (R2) resistance level, broke the 0.7785 (R1) support line, now turned to resistance and tested the 0.7725 (S1) support line. The drop of the pair is intense predisposing for further losses, yet some stabilisation in the late Asian session seems to take place. Also, it should be noted that the RSI indicator, below our 4-hour chart, is at the reading of 50 implying a rather indecisive market for the time being. Should the bears regain control we may see it breaking the 0.7725 (S1) support line and aim for the 0.7665 (S2) level. On the other hand, should the bulls take over, we may see the pair, breaking the 0.7785 (R1) resistance line and aim for the 0.7840 (R2) level.

The pound dropped somewhat against the USD, EUR and JPY yesterday given also BoE’s dovish stance as expressed in its interest rate decision. The bank as was widely expected kept interest rates unchanged at 0.10% as well as its asset purchases program at £895 Billion in total. In its accompanying statement the bank maintained its dovish bias and despite recognizing improving conditions internationally and at home, highlighted that “the outlook for the economy… remains unusually uncertain”. On the other hand, UK’s fast pace vaccination program, with half of the country’s adults reported to be vaccinated, tends to create hopes for a quicker return to some sort of normality and seems to support the pound.

GBP/USD dipped lower yet the overall picture did not change as the pair maintained its sideways motion between the 1.3845 (S1) support line and the 1.3990 (R1) resistance line. For our sideways bias to change we would require a clear breaking of either of the prementioned boundaries. Should the pair find renewed buying orders along its path, we may see it breaking the 1.3990 (R1) resistance line and aim for the 1.4145 (R2) level. On the other hand, should a selling interest be displayed by the market for cable, we may see the pair’s price action, breaking the 1.3845 (S1) support line and aim for the 1.3700 (S2) support barrier.

In a rather light calendar today, we note in the European session, Germany’s PPI rates for February and in the American session Canada’s retail sales growth rate for January, while later on oil traders may be more interested in the weekly US Baker Hughes oil rig count figure. On the monetary front we note that ECB Board member Fernandez-Bollo and BoE’s Cunliffe are scheduled to speak. 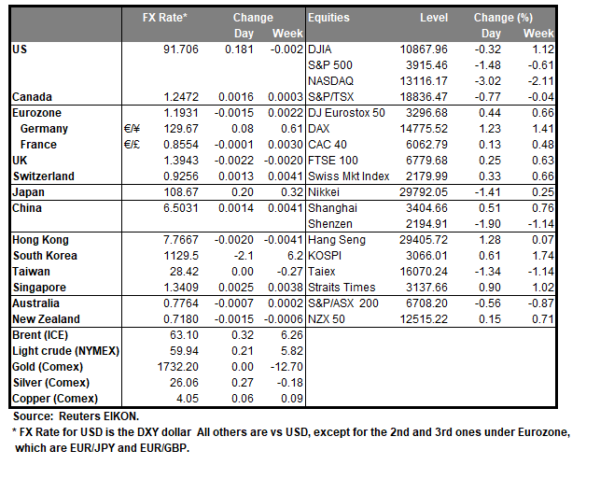 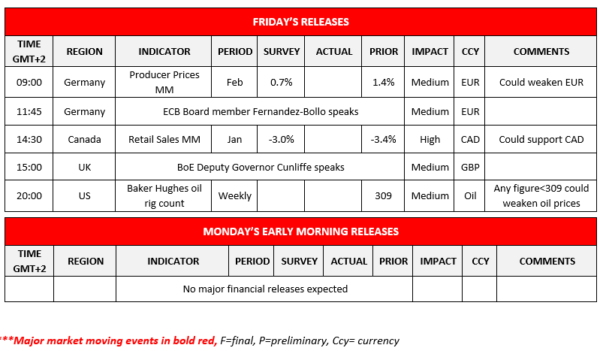