The Weekly Bottom Line: Spring is Just Around the Corner

U.S. – Spring is Just Around the Corner

Financial markets had yet another volatile week. As of writing, the S&P 500 was down 1.1% compared to last week’s close. The pullback was primarily led by technology and financial sector stocks. The highs early in the week were followed by a sharp drop after the Federal Reserve said it will not extend a pandemic-era rule that allowed banks to relax capital levels. Banks will now have to hold capital against their holdings of Treasuries, raising the implicit cost of holding them. The announcement helped push up treasury yields. The 10-year Treasury yield climbed to 1.74% at the time of writing, up 0.1 ppts from last week. But despite having a bad week, the S&P 500 is still 5.4% higher than where it was at the start of this year.

On the monetary policy front, the Federal Reserve sharply upgraded its growth outlook. The median projection among FOMC members is for the economy to expand 6.5% (from 4.2%) this year due to stimulus and vaccine rollout. Still, the Fed maintained its current monetary policy stance. This includes keeping the federal funds rate at the current 0% to 0.25% range and a commitment to purchase at least $80 billion Treasuries and $40 billion mortgage backed securities per month. The Fed’s projections also showed the majority of members do not expect to raise the federal funds rate until at least 2024.

In terms of economic data, retail sales declined by 3.0% month-on-month in February (Chart 1). This was worse than the consensus estimate for a 0.5% drop. The decline comes on the back of unseasonably cold weather that shut down many of the southern states. It also comes on the heels of a strong and upwardly revised reading in January. The good news is that spring is just around the corner and optimism is growing. The timing of the $1.9 trillion American Rescue Plan couldn’t be any better. It comes at a time when cases are declining and lockdowns are being eased. This will make spending easier, allowing retail sales to recover in the coming months.

Turning to the real estate sector, housing starts fell by around 10% in February, declining for the second straight month (Chart 2). Housing starts dropped to 1.42 million units (annualized) from 1.58 million in the previous month. The fall in housing starts and building permits was seen across both single-family and multi-family segments. The decline was also seen across most regions but was concentrated in the Northeast, which saw a staggering 40% drop. Despite the slow start to the new year, we expect homebuilding activity to remain elevated near current levels. This is thanks to a low inventory environment and the fact that housing demand will improve as the labor market heals.

Meanwhile, new COVID-19 cases continue to fall. And the vaccine rollout is only getting faster. So far more than a 115 million doses have been administered, a 14% increase compared to last week. States are easing restrictions and air travel is picking up. There is plenty of reason to be optimistic, but states need to tread carefully. As long as the virus is still with us, reopening economies too quickly could still lead to a surge in cases. 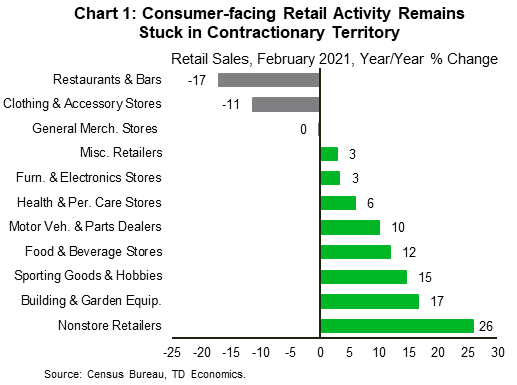 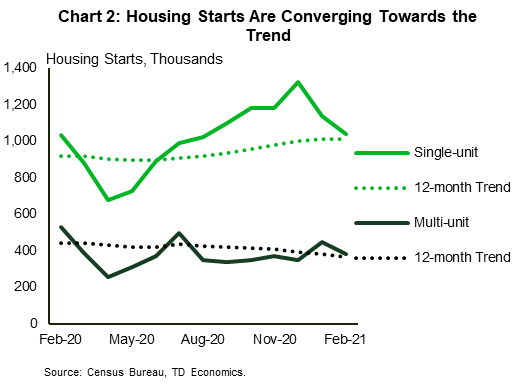 North American markets were jolted this week by the U.S. Federal Reserve’s expectation to keep its policy rate near-zero for the indefinite future, despite sharply upgraded economic growth forecasts. In Canada, the TSX shot higher mid-week, but lost some steam thereafter, amid softening oil prices and drops in other sub-indices, outside of energy. Bond yields, on the other hand, shot higher, with the Canadian 10-year yield touching its highest level in over one-and-a-half years, as investors continued to bet on easy monetary policy sparking higher inflation.

Prospects for economic growth were buoyed this week by a raft of generally strong data (Chart 1). Canadian housing markets remained molten in February, with home sales sprinting 43% higher year-on-year. On a month-on-month basis, sales gains were recorded in all but three provinces. This strong demand combined with drum-tight supply fueled yet another frothy gain in home prices, which are now up a towering 25% year-on-year. Even in condo markets, where price growth has been more subdued, benchmark prices grew at the fastest monthly pace since 2017.

With demand remaining so strong, homebuilders have responded. Housing starts clocked in at 245k (annualized units) in February, down from January’s multi-year high, but still a robust pace precisely 15% higher than the 5-year trend. Moving forward, we expect home sales to remain historically elevated over the next several months, juiced by low mortgage rates and an improving economy. This should keep starts humming along at an elevated pace.

Elsewhere, despite a drop in auto sector production owing to input shortages, manufacturing shipments recorded a solid 3.1% m/m gain in January, bringing sales levels above their pre-pandemic level for the first time. Stripping away price changes, volumes were up a decent 1.1%. Also impressive, gains were recorded in 16 of 21 industries. January wasn’t as good a month for retailers, as lockdowns drove retail spending 1.1% lower. However, activity in the retail sector likely picked up in February and March, thanks to re-openings. Consumer price inflation data was also subdued, coming in at 1.1% year-on-year in February, although this was slightly higher than January’s print. The acceleration came on the back of rising gasoline prices, which continued to rise through March.

Add it all up, the data points to solid first quarter economic growth (Chart 2). Our latest Quarterly Economic Forecast foresees even stronger growth in subsequent quarters, buoyed by accelerated vaccine rollouts, high commodity prices, and sizzling U.S. growth. These healthy gains will be likely be shared across provinces.

Of course, our projections are highly dependent on the course of the virus. On this front, we are not out of the woods yet, and the risk of a third wave looms. Still, there are upside risks to the outlook too. Consumers have accumulated a stockpile of savings that could jolt consumption by more than we expect. In addition, the upcoming federal budget (and the $70 – $100 billion of currently unallocated federal funds) has the potential to further buoy, boost and juice the recovery. 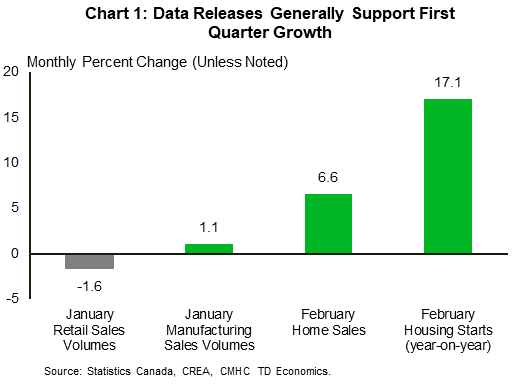 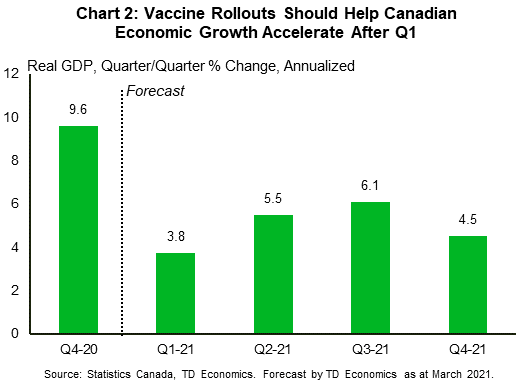 A large decline in consumer spending in February (forecast: -0.9% nominal, -1.2% real) after an even larger rise in January has been signaled by the retail sales data, with the decline likely due to weather effects as well as a fading of the boost from January’s stimulus payments. We estimate a 7.0% m/m plunge in income, following +10.0% m/m in January. Our +0.2% m/m forecast for core PCE prices is above consensus, but, with the help of revisions, we expect the y/y pace to be 1.5%, identical to the currently reported January reading. 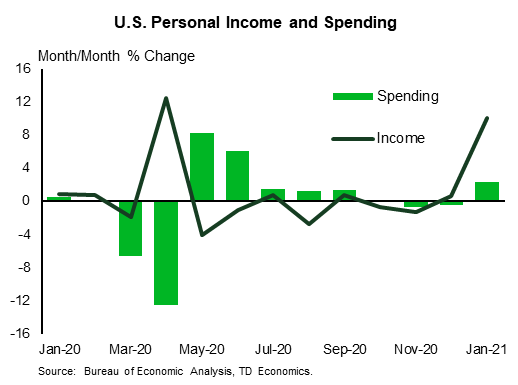