…but the positive data could be overshadowed by upsurge in virus cases in Eurozone and elsewhere, and Germany’s extension of lockdowns.

The biggest news this morning was that the latest manufacturing and services PMIs from Eurozone’s largest economies were much better than expected, providing a bit of relief for risk assets after worries over the latest virus surge in the region had weighed on sentiment at the start of the week.

But is this enough to offset worries about resurgent virus cases in Europe and worries about the slow progress of administering the Covid vaccines, as well as the extension of lockdowns in places such as Germany? I doubt it.

Tuesday’s sell-off in crude oil, and the rally in Japanese yen and US dollar were clear risk-off signs for the wider markets. Yet European stock indices closed mixed, while the drop in US markets were relatively mild.

While US index futures rebounded this morning and European indices had bounced off their worst levels, it remains to be seen whether worries about social restrictions hitting demand in Europe will come back to haunt the equity markets.

Virus cases have also been surging in India, one of the largest consumers of crude oil in the world. If the virus situation deteriorates in India and continental Europe, then investors will push back their expectations about the timing of lockdowns being lifted. There’s already doubt that due to the slow progress of vaccine rollouts summer holidays in Europe might be cancelled.

As the virus has come back to the forefront, today’s stronger PMI data might be overshadowed.

The German stock index provided its first bearish indication in weeks after it failed to hold its breakout above Monday’s high. But it remains to be seen whether we will now see downside follow-through as it continue to trade inside a holding pattern not far from its record high. I feel that with a more subdued macro backdrop owing to the extension of lockdowns, the German index could potentially correct itself in the coming days if the bulls continue to show hesitation at these levels: 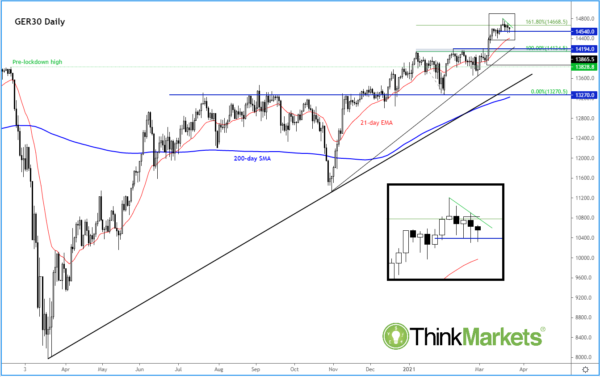 Short term support that needs to give way is seen around 14540 area. Below this zone there is not much further obvious support seen until much lower at around 14135 to 14195, which was the base of the last big breakout. So, there is the potential for a sizeable drop if the sellers manage to hold their ground after exerting some pressure at the start of the week.