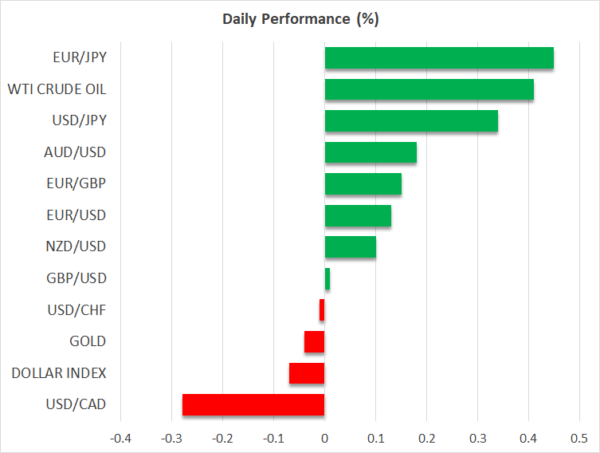 All eyes on infrastructure and taxes

The imminent threat of higher taxes in America hasn’t spooked financial markets so far, but this serenity will be tested today at around 20:00 GMT, when President Biden unveils the details of his ambitious infrastructure plan. The latest reports suggest the overall package will cost a little over $2 trillion, partially funded by raising taxes on businesses and investments.

Specifically, the corporate tax rate could be hiked to 28% from 21% currently, while capital gains on large investments might be taxed in a progressive manner like regular income, with the rate scaling higher as the amount itself increases. Payroll taxes on the highest income earners could be increased a shade too.

The striking part is how well markets have absorbed these leaks. Signals for higher corporate taxes after decades of taxes being slashed would normally wreak havoc in stocks, but investors remain tranquil. This might reflect expectations that the final package will be watered down in Congress, and that the money raised through taxes will be used to fund productive investments, ultimately benefiting the economy.

Still, the actual details could be crucial. How big is the final price tag, and how much will taxes be hiked to offset it? If the plan is only partially funded by new taxes, then the deficit will continue to balloon, softening the blow for markets. Even if the dollar and equities retreat as markets grapple with the threat of taxation, the overall trajectory for both seems positive in an environment where America out-vaccinates and out-recovers most nations.

It was a relatively quiet session on Tuesday. The grand theme setting the tempo in the FX scene is the spike in Treasury yields. This is translating into a stronger US dollar as the reserve currency regains its yield advantage, powered by expectations that the Fed will be among the first central banks to raise interest rates again.

In contrast, the Japanese yen and the Swiss franc have been demolished by this rising yield environment, as rate differentials widen against them. The BoJ caps domestic yields from rising beyond a certain level and the SNB boasts the lowest rates globally. Both the yen and franc appear to have reclaimed their old role as ‘funding currencies’, whereby investors borrow in a low-yielding regime to invest in higher-yielding assets abroad.

The euro is another popular funding currency that’s likely to keep struggling. Europe has fallen way behind in the global immunization race, several economies are still shut down, and government spending pales in comparison to America. It is difficult to imagine what can turn this narrative around.

In equities, the S&P 500 retreated a touch but remains within breathing distance of its record highs. In this sense, the prospect of higher corporate and capital gains taxes doesn’t seem fully priced in yet, so there might be scope for a pullback. That said, with almost 45% of Americans having received a vaccine jab and an overload of federal spending in the pipeline, any correction could be short-lived.

In energy markets, there’s an OPEC+ meeting today. The cartel and its allies have been very successful in managing supply in recent quarters, hence the relentless rally in crude prices. They are unlikely to unwind their production cuts today.

The consensus is that global demand is still far too fragile to absorb any meaningful increase in production. If the supply cuts are indeed extended, there might be a positive but minimal reaction in oil prices.

Meanwhile, gold has been battered and bruised by the stronger dollar and rising Treasury yields. A break below the $1676 lows could be devastating.

Finally, there’s a barrage of key data due out of the Eurozone, America, and Canada. 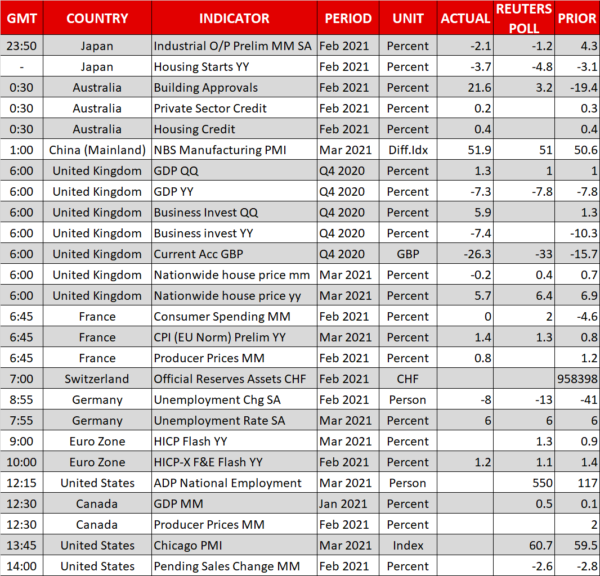