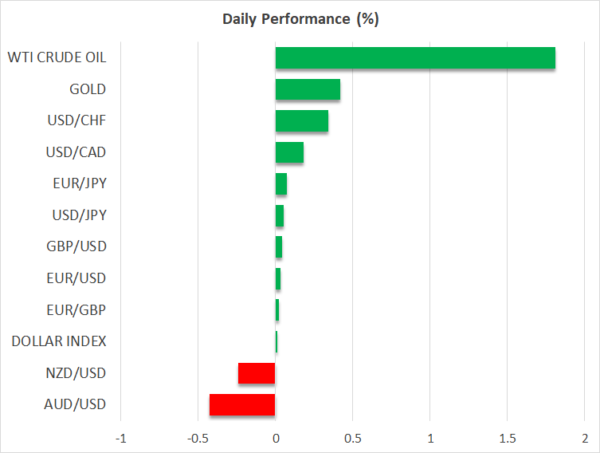 US President Joe Biden outlined his much-awaited plan on boosting infrastructure across America on Wednesday, unveiling a $2.25 trillion package that looks set to divide Congress. Biden’s ambitious policies include billions of dollars for improving road, rail and airport infrastructure, as well as funds for green projects, broadband and manufacturing subsidies. The caveat is that the Biden administration wants to pay for the big spending increases by raising the corporate tax from 21% to 28%, overhauling how overseas earnings are taxed and closing various company tax loopholes.

Many Republicans have already voiced their opposition and some business groups are also critical of Biden’s proposal. While it’s likely that the Democrats will again use the budget reconciliation process to pass the legislation through Congress like they did with the $1.9 trillion stimulus bill, it could nevertheless be a tight vote in both the Senate and the House.

On the whole though, even if the package gets watered down, it’s almost certain a sizeable infrastructure boost is on the way that should benefit businesses and the wider economy, with more to come. Biden intends to bring another bill to the table in a few weeks’ time to set out $1 trillion on social measures such as improving childcare, education and healthcare. That could prove a much tougher battle, however, as the White House wants to fund them by raising taxes on capital gains and high-income individuals.

There were no fireworks on Wall Street ahead of Biden’s big reveal on infrastructure as much of the leaked details had already priced in, sparking a bit of selloff in the Dow Jones Industrial Average, suggesting there was some ‘buy the rumour, sell the news’ going on. The Dow Jones slid 0.3% on Wednesday but both the S&P 500 (+0.4%) and Nasdaq Composite (+1.5%) managed to post descent gains as tech shares regained some attraction.

Stocks in Asia closed firmly higher today and major European bourses were up too. E-mini futures indicate the Nasdaq will extend its gains today, but it could be another difficult session for the Dow Jones.

Bond markets were surprisingly calm in the aftermath of Biden’s next massive stimulus proposal and Treasury yields edged marginally lower today. This weighed on the US dollar slightly, as the greenback lost some ground against a basket of currencies, though it was still trading not far from yesterday’s near 5-month peak of 93.44.

The somewhat softer dollar helped the euro avoid slipping to fresh lows overnight after French President Emmanuel Macron announced a 4-week nationwide lockdown yesterday evening. France’s third lockdown is another blow for Europe’s bumpy recovery, which is being hampered by a chaotic vaccine rollout and delays in the distribution of the EU’s virus recovery fund.

The euro was last trading at $1.1735, just off yesterday’s 5-month low of $1.1702. Sterling was flat at $1.3782, but the Australian and New Zealand dollars were struggling today, falling 0.5% and 0.2% respectively. The weakness could be due to both pairs breaching key support levels as there were no significant moves in yield spreads or domestic news to warrant the underperformance.

Oil up ahead of OPEC+ decision, gold extends gains

The loonie fared slightly better as oil prices headed higher today. OPEC and its non-OPEC allies are meeting today to discuss output levels for the next month. The alliance is expected to rollover existing quotas to April. However, some reports suggest the major producers will indicate a gradual easing of supply curbs going forward, which could send oil prices tumbling if confirmed. WTI futures were last up 1.8% above $60 a barrel and Brent futures were trading 1.6% higher.

Gold was also up on Thursday, extending yesterday’s rebound from three-week lows. Quarter-end rebalancing and short covering may be helping the precious metal recoup some losses after what was a terrible quarter. Gold was last quoted at $1715.75/oz (+0.5%). 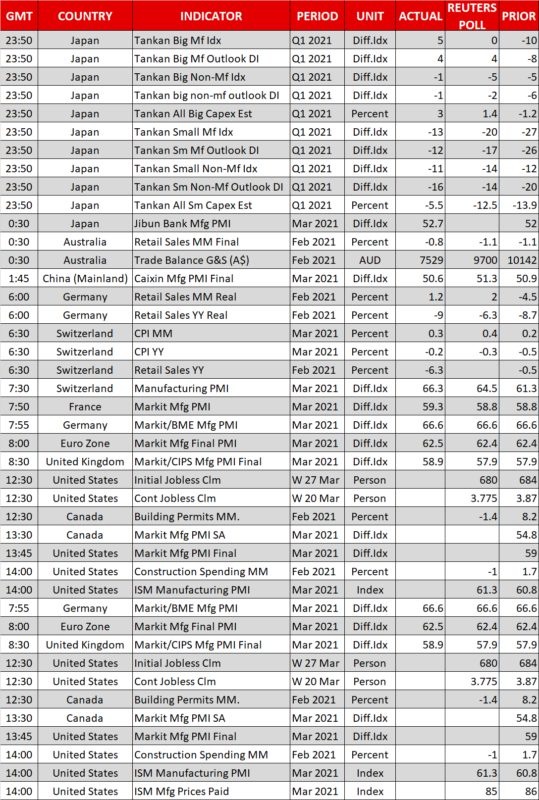