The Weekly Bottom Line: Emerging Markets Are Weathering the Storm

Economic data released this week gave credence to the notion that any past weakness in February was temporary. According to the Conference Board, consumer confidence shot up almost 20 points in March, rising to 109.7 – the highest level in a year. Both the present situation and expectations subcomponents gained on the month. While consumers’ assessment of present conditions is still well below pre-pandemic levels, expectations are riding high, thanks in part to rising vaccinations and the latest stimulus package (Chart 1).

Speaking of the labor market, the week’s most important indicator, the March nonfarm payrolls report, comes out tomorrow morning. If the ADP’s private sector employment report (up 517k jobs) is any indication, it should push the data pendulum further into positive territory. Keeping with the positive theme, the ISM manufacturing index rose 3.9 points to 64.7 in March – the highest level in 37 years, with its employment sub-index the largest contributor to the improvement.

One area of the economy to take a breather in an otherwise strong run is the housing market. Pending home sales fell a steep 10.6% in February. A combination of factors likely contributed to the decline, including inclement weather, but the biggest culprit was likely record-low inventories, which stood at only a hair above a million units last month. Pending home sales lead ‘actual’ sales by 1-2 months, which suggests that the recent weakness in resale activity likely continued in March (Chart 2).

Turning over to the health crisis, an increase in new COVID-19 cases this week led CDC officials to urge the public for continued caution. Fortunately, with vaccinations averaging 2.8 million doses per day and far outstripping new cases (averaging 64k per day), the light at the end of the tunnel continues to grow brighter.

Notable expansions in vaccines eligibility should further expedite the inoculation process and bring about a faster return to normalcy.  As of this week, roughly two thirds of all states had plans to open up eligibility to all adults by April 19th if they hadn’t done so already. After outlining new actions to help speed up the process, President Biden recently stated that 90% of adults will be eligible for vaccination within three weeks.

Progress in vaccinations was not the President’s only major announcement of the week. Following up on the American rescue Plan comes the American Jobs Plan. The $2.3 trillion spending package tilts heavily toward infrastructure, with $620 billion earmarked for bridges, public transit, roads, airports, electric vehicle infrastructure etc. The plan also includes supports for affordable housing, domestic manufacturing, expanding high-speed internet and $400 billion for caregiving for elderly and disabled Americans. The increased spending would be funded in part by raising the corporate income tax rate to 28% (from 21%). Biden will follow up with another major spending plan later this month, which is expected to focus on health and family care. Given their scale, these plans could alter the economy’s growth path over the next several years. The details on what ultimately comes to pass and how it is funded will be crucial in determining their economic impact. 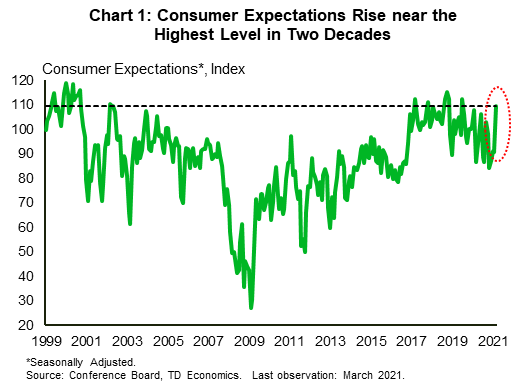 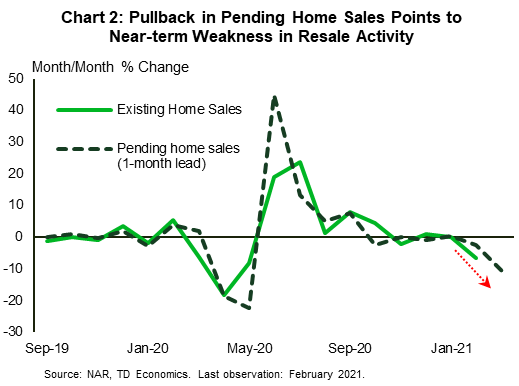 Canada – Recovery To Continue Even As Cases Rise

This week brought the strongest confirmation yet that the Canadian economy remained resilient through the second wave of the pandemic. With businesses and consumers becoming better adapted to operating in the pandemic environment, the economy continued grow at a solid clip in January and, likely, February.

The monthly GDP report released this week showed that real GDP advanced by better-than-expected 0.7% month-on-month (m/m) in January. What’s more, Statistics Canada projected that gains have continued into February, with the flash estimate calling for a 0.5% gain. As a result of this better-than-expected monthly outturn, first quarter economic performance is also shaping up better than expected, prompting us to revise our growth forecast up from 3.8% to 5.5% annualized.

As noted in our recent report, the move toward greater digitization is one reason why the economy had performed well in the first quarter despite the lockdowns. The pandemic prompted businesses to quickly ramp up their online platforms, and for consumers to adapt to shopping online and via alternative pickup and delivery options. Online retail sales took a flight as a result. But, it isn’t just retail stores that have expanded their online presence. With a shift to remote work, firms across the entire spectrum of industries have ramped up their online sales and service delivery. The most notable increases have been in healthcare & social assistance, finance & insurance and hard-hit accommodation & food services, where the share of businesses making 50% or more sales online had doubled or nearly doubled over the past year (see Chart 1).

That’s not to say that everything in honkey-dory. The recovery continues to be bifurcated, with businesses and workers in high-contact services industries still bearing a disproportional impact. The gap between these sectors and the rest of the pack widened further during the last lockdown as output in retail trade and accommodation & food services took a hit, while growth continued elsewhere (Chart 2). Fortunately, even in those highly-impacted sectors, the decline was nowhere close to what was observed last spring. The K-shaped nature of the recovery – across industries, age groups and pay scales – will be on display once again in next week’s jobs report. While easing containment measures in March likely led to strong hiring, there is still a long road to full recovery for hard-hit industries and lower-paid workers, with rising COVID-19 cases posing yet another speed bump.

Indeed, COVID-19 cases are once again rising briskly in Canada – up 32% from just a week ago. This is prompting some provinces to reinstate restrictions. This week B.C. implemented a 3-week “circuit breaker”, suspending many indoor activities. Ontario will likely follow suit, with premier Doug Ford expected to make an announcement later today. The province has seen a rapid rise in cases, with new variants of the virus now accounting for 67% of new cases, leading to the record number of patients in intensive care units. Despite those disappointing developments, robust economic performance through the second wave of the pandemic gives hope that renewed restrictions will slow but not derail Canada’s economic recovery. 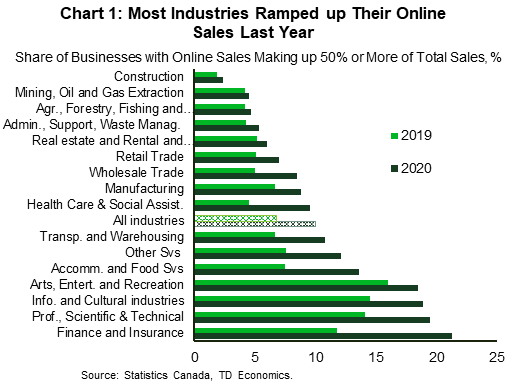 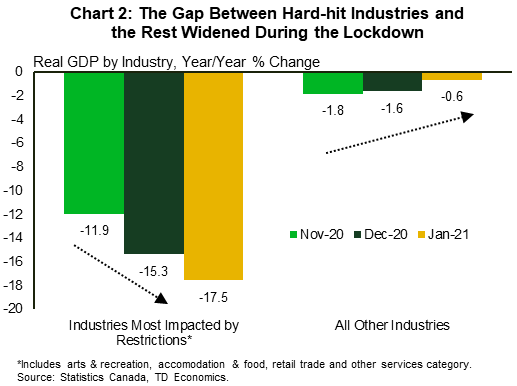 The U.S. bond market has led a global pullback in government debt since the start of this year. Higher inflation expectations and a more optimistic growth outlook are partly to blame. The U.S. 10-year Treasury yield climbed to 1.73% at the time of writing, up 80 basis points since the start of this year. The yield currently stands at its highest level since January of last year (Chart 1). Yields on shorter tenors have also risen recently. This week, the U.S. 5-year yield hit its highest point since February 2020. The jump in yields of shorter duration reflects investors’ concerns that the Fed might raise interest rates sooner than previously expected.

Rising U.S. yields make EM assets less attractive and EM investors jittery. But it’s too soon to sound the alarm. Favorable external balances and relatively modest inflows prior to the pandemic make EMs today less vulnerable to a taper tantrum à la 2013 (see our latest Quarterly Economic Forecast). At the same time, while EM currencies remain under pressure – a particular problem for EMs with high levels of dollar-denominated debt – they are likely to weather the storm. Here’s why:

Moreover, there are several developments working in EMs favor. These include higher commodity prices and growth spillovers from the $US 1.9 trillion Biden stimulus. And, while the pandemic is still raging across some EMs, most of them have become reluctant to tighten restrictions. This is allowing EMs to operate at a higher capacity than most advanced economies.

Of course, EMs are not a monolith. Take Turkey’s example. The recent sacking of the Central Bank’s Governor led to the Turkish Lira stumbling by as much as 15%. Equities and bonds also fell on the news. A persistent tightening in financial conditions via Lira depreciation, widening credit spreads and rise in local currency yields will weigh on Turkey’s growth this year.

In related news, the IMF is likely to approve a new SDR allocation of US$650 billion by June 2021 at the earliest. This should help EMs faced with dollar funding pressures. SDRs are IMF issued international monetary assets. They are used by countries as reserves and can be sold and used as payment to other central banks. We had proposed almost a year ago for the IMF to inject additional SDRs (see report). We are glad to see it finally being done. 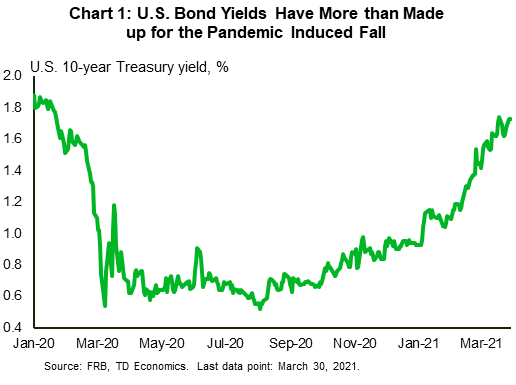 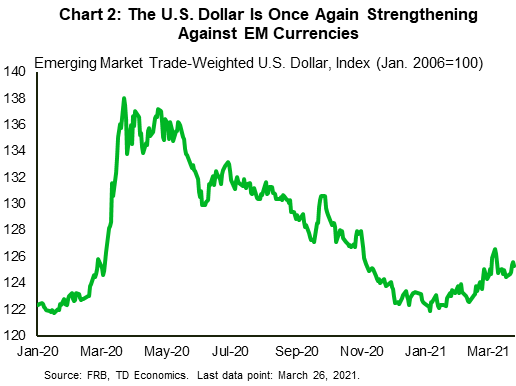