USD Retreats Ahead Of The Fed’s Minutes Release

The greenback weakened to a two-week low against a basket of its counterparts yesterday after U.S. treasury yields declined as high expectations for the Fed to tighten its policy earlier than stated, seem to be on the retreat. In the epicenter of trader’s attention is the release of the Fed’s last meeting minutes which are to provide more clues regarding the policymaker’s intentions about the bank’s monetary policy. The Fed’s Chairman Powell recognized in the near past that the US economic recovery “has progressed more quickly than generally expected and looks to be strengthening”, which may allow for an earlier tightening of the Fed’s monetary policy in some way, yet that remains to be seen. Once again Gold’s prices were able to benefit from the weakening USD, while stockmarkets occurred losses with tech shares leading the way given that Nasdaq dropped after a stellar rise on Monday. Given the lack of high impact financial releases we expect fundamentals and the Fed’s minutes to play a key role in USD’s direction.

The USD Index retreated reaching a two week low as it was aiming for the 92.15 (S1) support line. We tend to remain bearish of the index’s movement as long as it remains below the downward trendline incepted since the 5th of April albeit the downward movement may have started allready from the beginning of the month and currently seems to correct a bit higher. It should be noted that the RSI indicator below our 4-hour chart is below the reading of 50, also underscoring the presence of the bears. Should the bears actually maintain control over the index’s direction, we may see it breaking the 92.15 (S1) support line and aim for the 91.65 (S2) support level. Should the bulls take over, we may see the index breaking the prementioned downward trendline and aim if not breach the 92.80 (R1) resistance line.

The Canadian dollar weakened against its U.S. counterpart on Tuesday as concerns rose about Canada’s third wave of the COVID-19 pandemic. Specifically, the number of daily new cases in Canada has spiked three times in the past seven days increasing worries, as hospitalizations are surging, and a third wave may be sweeping through the country. It should be noted that oil prices tended to edge higher yesterday, yet overall maintained their sideways motion providing some optimism for the outlook of the Canadian economy. CAD traders are now also focusing on the trade data for February which are to be released today, yet also attention turns to the employment data for March which are due out on Friday, given that both releases could affect BoC’s monetary policy.

USD/CAD rose yesterday bouncing on the 1.2520 (S1) support line. The pair’s price action has broken the downward trendline characterizing its movement since the 30th of March, hence we switch our bearish outlook in favor of a bias for sideways motion initially, yet we suspect that the bulls may be just around the corner for the pair, given that the RSI indicator below our 4-hour chart has broken above the reading of 50 and maintains an upward slope. Should the upward motion be maintained we may see the pair breaking the 1.2610 (R1) resistance line, thus opening the way for the 1.2700 (R2) resistance level. Should a selling interest be displayed by the market for USD/CAD, we may see the pair breaking the 1.2520 (S1) support line and aim for the 1.2400 (S2) level. 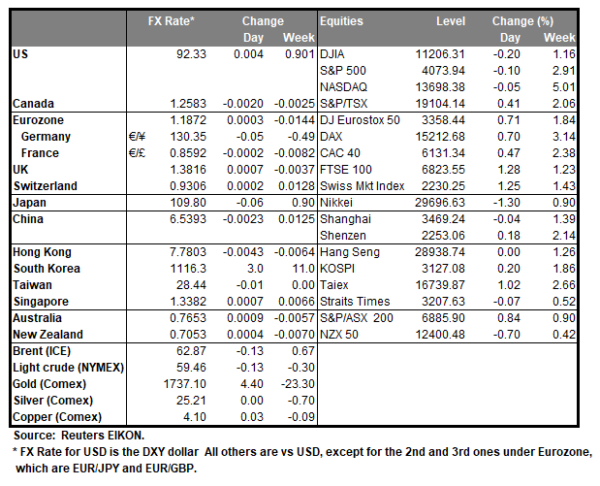 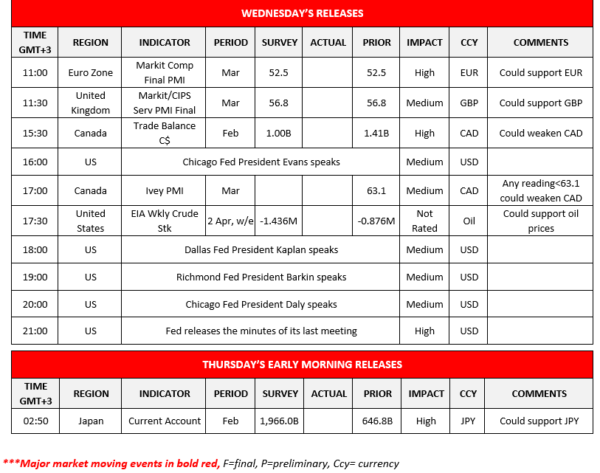