The surge in employment was stronger, and more broadly based than expected. Employment among the hardest hit hospitality sector industries improved largely as expected given easing virus containment measures in March – employment in information, cultural, &recreation, accommodation & food services, and ‘other’ services combined to add 80k jobs, and retail/wholesale employment jumped 92k. And a sizeable chunk of that recovery is at risk of retracing in April given the third wave of virus spread and restrictions. But employment was still up more than 130k outside of those sectors, and those gains are more likely to stick with the latest restrictions announced still targeted at high-contact service sectors and in-store retail shopping.

The employment shortfall relative to pre-shock levels is still huge at 296k. Weakness is massively concentrated in the travel and hospitality sectors – the shortfall in employment in accommodation & food services alone was 298k in March. The rest of the economy broadly has continued to recover since the spring of last year, including through the second wave of virus spread and containment measures over the winter. That is likely to be true through the third wave as well. Hours worked rose another 2% in March, building on a 1.4% increase in February and 0.9% increase in January. Full-time employment rose 175k in March and 128k in part-time. Private sector employment was up 201k.

The March data is a reminder that activity will bounce back relatively quickly provided the virus threat fades. Re-imposed containment measures in some regions will probably weigh on employment in April. But larger-than-usual government supports are still in place for those losing work, so household purchasing power will remain resilient to any near-term labour market weakness. Vaccines remain the light at the end of the pandemic-tunnel, and distribution continues to ramp up even as virus spread escalates. 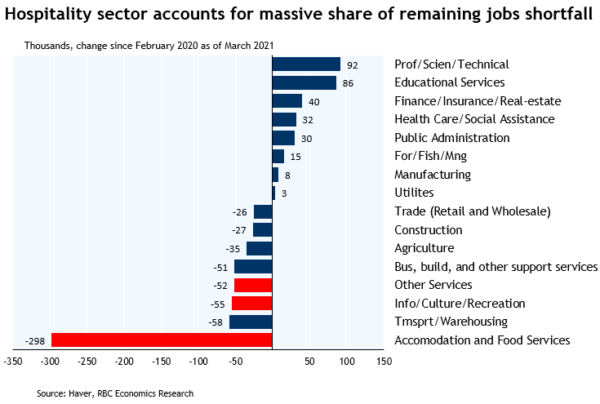 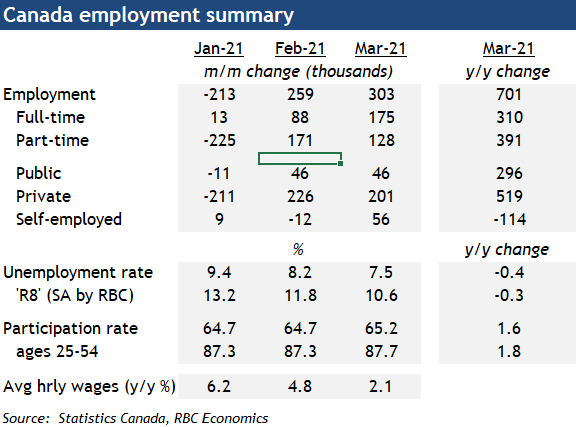