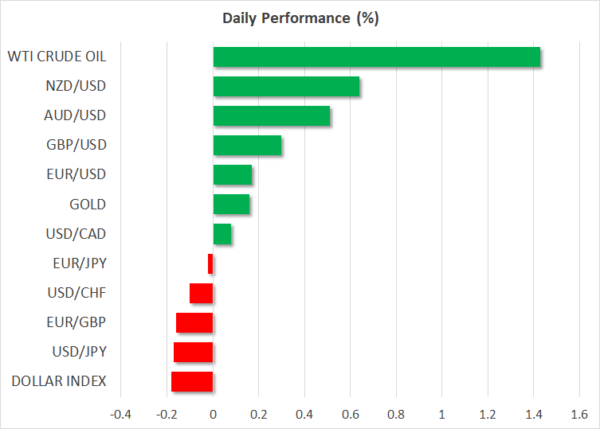 No panic after US inflation shoots higher

Markets appeared to brush aside fears of higher inflation after the much-anticipated CPI data out of the United States failed to spark a huge reaction on Tuesday. The US consumer price index rose to a 2½-year high of 2.6% y/y in March, mainly on the back of a jump in gasoline prices. However, Treasury yields went in the opposite direction, suggesting traders have mostly priced in the stronger inflation outlook for the next few months.

The 10-year yield fell almost nine basis points, pulling the dollar index down to a near 4-week low today.

Fed policymakers have been messaging for some time now that inflation will overshoot their 2% target due to transitory factors and the low base effect from when prices plummeted during the Spring 2020 global lockdowns. All the indications are that the Fed has succeeded in convincing markets that this inflationary outburst will be temporary, posing little threat to the rates outlook.

However, it’s too soon to be certain just yet that inflation will not overshoot by too much and fall back before the end of the year. The month-on-month increase in the CPI was a whopping 0.6% – the biggest monthly gain since August 2012. Business surveys around the world continue to point to higher input costs and with the pent-up demand expected to boost consumption as virus curbs are gradually lifted in the coming months, the ingredients are certainly there for an era of high inflation.

S&P 500 hits another record; tech back in favour?

But as the dollar slid, stocks cheered the data on relief that the inflation spike was more or less in line with expectations. The S&P 500 climbed to fresh record territory, closing at a new all-time high of 4,141.59. Interestingly though, the benchmark index was led higher by gains in the Nasdaq than the Dow Jones, which had been the case more recently. The DJIA closed slightly lower (-0.20%), while the Nasdaq Composite added 1.05%.

The notable gainer among tech stocks was Tesla (+8.60%), which soared on forecasts that sales will skyrocket in the coming quarters as the electric car manufacturer ramps up its production capacity.

However, there was a broader trend at play as well. The US Food & Drug Administration paused the rollout of Johnson & Johnson’s Covid-19 vaccine on Tuesday as it investigates cases of blood clots. Although it is widely expected that inoculations with the Johnson & Johnson vaccine will resume soon, the troubling headlines have nevertheless raised some doubts about the reopening timeline of the US economy.

This may have had a dampening effect on value and cyclical shares yesterday and drawn some funds back into tech and growth stocks. Futures for all of Wall Street’s main indices were marginally up on Wednesday ahead of key earnings announcements from JP Morgan, Goldman Sachs and Wells Fargo before the market open.

If defensive plays were a factor in boosting tech stocks, there was little sign of any risk-off moves in currency markets. The risk-sensitive antipodean pairs extended their gains today, with both the aussie and kiwi surging to three-week highs. There were no surprises from the Reserve Bank of New Zealand’s policy decision as the central bank kept its stimulus settings and guidance unchanged.

The pound also advanced against the greenback, rising above $1.38, though the euro lagged somewhat.

The safe-haven yen, meanwhile, declined against most of its major peers, unable to find much support from the fresh vaccine setbacks. An unexpected slump in Japanese machinery orders may be weighing on the currency as it casts doubt about the strength of Japan’s economic recovery.

The main highlight later today will be a speech by Fed Chair Powell at 17:00 GMT who is scheduled to speak at the Economic Club of Washington in a virtual event.