Sentiment at the start of this week remained positive for most risk-sensitive assets. European stocks followed Asian markets and US equities higher. Copper prices rallied while crude oil held steady after a big upsurge last week. In FX, the dollar retreated, extending its losses from the previous week. The EUR/USD climbed above $1.20 while the pound extended its sharp rally from Friday. US bond yields dipped further, keeping gold supported.

Earnings season is heating up

The big banks posted positive results last week and more than 200 companies are expected to report this week, including 70+ S&P 500 companies. Blue-chips reporting today include Coca-Cola, IBM and United Airlines. Thanks in part to positive bank earnings last week, all major US indices closed higher last week, as the S&P 500 and Dow Jones Industrial Average rallied to new all-time highs. Will the Russell 2000 and Nasdaq Composite join them this week?

Last week also saw US bond yields drop somewhat surprisingly despite some more bumper economic data and bank earnings from the world’s largest economy. The dollar slipped, allowing other major as well as emerging currencies to rip, while gold also found some buyers. That trend has remained in place at the start of this week. The EUR/USD is catching some attention as it ripped higher this morning, breaking the $1.20 barrier. The single currency has found renewed support recently as it gets a boost from expectations that growth will accelerate in the coming months on the back of faster vaccinations. Will we see some evidence of that already in PMI data, on Friday? The ECB is likely to remain cautious and re-iterate the need to keep QE taps wide open on Thursday, which should keep the potential gains in check.

So, as we start a new week, sentiment remains towards most risk assets. But what exactly is causing this, and can the optimism continue?

In the weeks ahead, the theme is likely to be a repeat of this week: long everything versus the dollar and buy the dips in the stock markets. This trend will only change when investors no longer think that the rise in inflation is going to be transitory or we see central bank heads change their tones noticeably about their respective monetary policy stances. For this to happen we need to see evidence of inflation rising more profoundly, which could encourage investors to start betting about a quicker tightening of monetary policy than expected, like we have seen in the Chinese markets where equities have struggled noticeably of late.

For now, the Federal Reserve Chairman Jerome Powell like other major central bank chiefs have made it clear that even though he’s optimistic on the economy, the rise in inflation is likely to be transitory. This message is likely to be echoed by Christine Lagarde at the ECB’s press conference on Thursday.

Therefore, any short-term dips we may see for risk assets in the coming weeks should be treated as retracements than a complete trend reversal, until such a time the markets create distinct reversal patterns like major lower lows etc.

The economic calendar for the week ahead is a busy one with lots of macro data and a couple of central bank meetings to look forward to. The earnings calendar is jam packed. Here are the highlights: 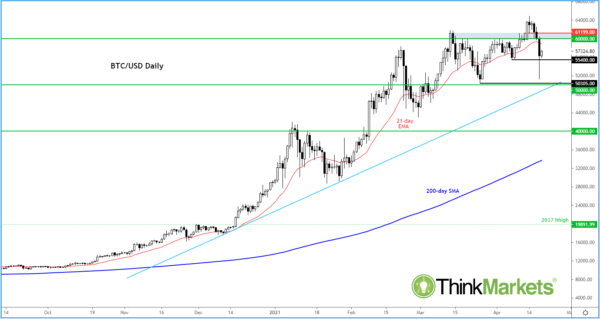 Apart from news of the breakaway super league involving 12 major European football teams, Cryptos also made the news over the weekend as prices collapsed.Bitcoin sank from above $60K to below $52K for the first time since March 26 on Sunday, before bouncing back to trim its losses sharply.

But every single dip has been bought and this may turn out to be another such occasions. The technical bias would only turn decisively bearish when prices create a major lower low. The last low comes in at around $50300, where we also have a bullish trend line converging. So, a potential move below that level would be deemed a bearish technical breakthrough.

At current prices, the crypto remains in no man’s land. The key level of resistance is now at around $60K, previously resistance and support. Given Bitcoin’s inability to hold above this level, we may see further profit-taking from the longs if the digital currency gets around that level again.