Euro In Holding Pattern Ahead Of ECB Meet

The euro continues to drift in tranquil waters this week. After pushing above the 1.20 line on Monday, the euro has not strayed very far from this psychologically important level. Currently, EUR/USD is trading at 1.2039, up 0.o4% on the day.

ECB likely to hold the course

The ECB holds its policy meeting later today (11:45 GMT), and the central bank is widely expected to hold the course on monetary policy and leave the main financing rate at 0.00%.

The ECB is not expected to make any changes to its Pandemic Emergency Purchase Programme (PEPP) until the eurozone recovery is well underway. That is unlikely to occur before the second quarter at the earliest, as the economy will have a tough time improving until the vaccine rollout, which was been plagued with setbacks, finally gets on track.

The euro has sizzled in April with gains of 2.7% and has crossed above the 1.20 level. The ECB, which has been cautious and dovish, has not been a catalyst for the euro’s upward move, and today’s meeting is expected to be a non-event in the currency markets. Still, the currency could get a bit of a boost if ECB President Christine Lagarde’s comments after the meeting are more optimistic than expected.

The ECB remains committed to a dovish monetary p0licy, but there have been recent comments by ECB hawks who are pushing for early policy normalization. Will the ECB change its stance in the coming months? We’ll have to wait for the ECB Strategy Review, which should be published this summer, in order to get a clearer picture of what the central bank is planning regarding its QE programme. The Strategy Review could clarify whether the ECB maintains its open-ended QE programme after winding up PEPP in early 2022. This decision could have a significant impact on the direction of the euro. 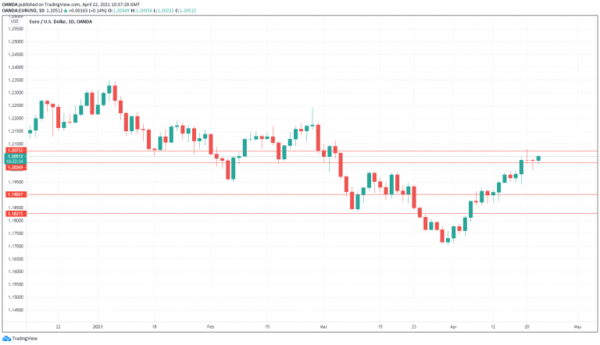