The Bank of Japan (BoJ) announces the outcome of its April monetary policy meeting on Tuesday and will also publish its latest Outlook Report. Japan is facing a fourth wave of the coronavirus, threatening new state of emergencies being declared across the country. However, the economy has been recovering at a respectable pace, with the help of booming exports. But as far as the yen is concerned, the BoJ’s yield cap means the growth prospects of rival economies matter more in determining yield differentials. Hence, should the Bank lift its growth projections while downgrading the inflation outlook as expected, market reaction will probably be muted.

Since the onset of the pandemic, Japan has been using a different model to lockdowns in trying to contain the spread of Covid-19. Tight lockdowns are not permitted under Japan’s constitution, so the government has been exercising its power to declare state of emergencies to restrict movement and advise businesses and individuals to adhere to virus rules. This alternative approach has allowed the economy to stay mostly open throughout the pandemic with only limited shutdowns.

Consequently, economic output hasn’t suffered as badly as other advanced economies. In fact, Japan has the smallest output gap among the G7, and with the recovery in international trade holding up in 2021, the gap is expected to have shrunk further in Q1. Japanese exports surged 16.1% year-on-year in March. But while the rebound in consumption hasn’t been as strong, the Bank of Japan is anticipated to revise up its growth forecasts in its quarterly report on Tuesday as it keeps policy unchanged. 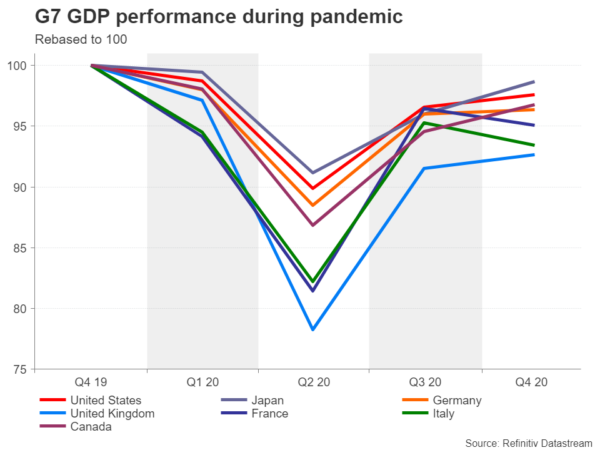 No inflation threat in Japan

However, despite the pandemic shock being milder in Japan, inflationary pressures remain subdued, even as consumer prices are creeping higher in other parts of the world. The latest inflation data shows core CPI remained in negative territory in March. The BoJ is widely predicted to cut its CPI forecasts for the current financial year, and as it publishes new projections for 2023 for the first time, inflation is symbolically expected to stay below the 2% target when Governor Haruhiko Kuroda’s term ends in April of that year.

The BoJ’s ongoing struggles to boost inflation can only imply that its long-running money printing programme won’t be ending anytime soon. At the last meeting in March, the Bank made some tweaks to its policies of negative interest rates, yield curve control and ETF purchases to make its various monetary easing measures more sustainable, in a move that acknowledges that it is in it for the long haul.

Yen pinned down by yield cap

But even before the policy review, there was little doubt that yield curve control has become a permanent fixture in the BoJ’s policy framework. And now that sovereign bond yields globally are on the rise, a set yield target is having the desired effect. The BoJ aims to keep the 10-year Japanese government bond yield at zero percent, fluctuating by 25 basis points on either side of this target. As other countries’ yields rally on expectations of higher growth and inflation, Japanese yields are pinned near zero, depressing the yen. 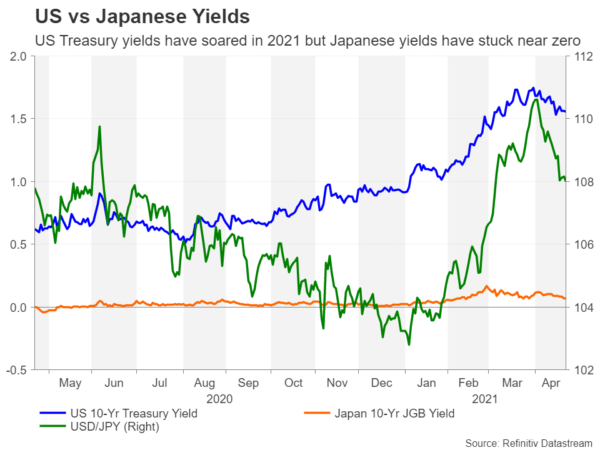 Combined with the massive fiscal stimulus and strong export demand, a weaker yen should keep the economy supported, especially if another state of emergency is declared in highly populated districts such as Tokyo and Osaka in the coming days. Unless Japan’s Covid infection rate begins to ease soon, there’s a real risk growth forecasts might need to be revised back down again. Furthermore, there’s the added danger that the country’s extremely slow vaccine rollout could exasperate the worsening virus picture.

However, whether the economic outlook continues to improve, or it takes a turn for the worse in the coming months, it’s unlikely to affect monetary policy as hitting the inflation target remains a long way off and there’s little else policymakers can do to stimulate the economy. Thus, it will be risk sentiment and the widening yield differentials that determine the yen exchange rate for the foreseeable future.

The yen is currently at crossroads against the US dollar as the pair has just breached its 50-day moving average (MA) and is testing the 38.2% Fibonacci retracement level of the January-March uptrend at 107.76. Failure to hold above this region would open the way for the 50% Fibonacci of 106.76, switching the medium-term outlook to neutral.

However, if US Treasury yields were to resume their rally, dollar/yen could bounce back above the 50-day MA, currently around 108.25. Successfully reclaiming the 50-day MA would bolster positive momentum for the dollar, bringing the 109 level just above the 23.6% Fibonacci back into range.