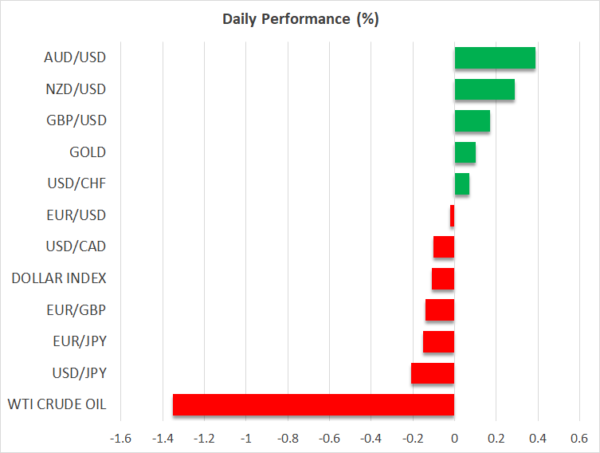 Dollar stuck in the doldrums but yields firmer eyeing Fed

It’s Fed week but the dollar can’t catch a break as the US currency extended it’s slide against its major peers amid a combination of a dovish Fed rate outlook and rising optimism in other parts of the world. Fed policymakers have been out in the droves lately, dispelling the notion that a rapidly accelerating recovery in the United States equates to an early withdrawal of stimulus.

It’s highly unlikely that the Fed will deviate in any way from it’s very dovish soundbites on Wednesday when it’s expected to keep policy unchanged. However, while the repeated assertions by the Fed that tapering remains a long way off have knocked the dollar off its pedestal, bond markets are not so sure. The 10-year Treasury yield seems to have found support in the 1.53% region and is currently edging higher.

This suggests the improved risk appetite on the back of a brighter growth outlook in Europe and elsewhere have played a bigger role in undermining the dollar in recent days. The greenback brushed 7½-week lows against a basket of currencies earlier today as the euro topped the $1.21 level for the first time in two months, while sterling shot above the $1.39 handle.

The euro eased somewhat heading into the European session but sentiment towards the single currency has shifted dramatically during April on growing signs that the Eurozone economy will avoid a major meltdown from the latest round of lockdowns. European PMIs have been much stronger than expected in both March and April, underlining how businesses are adapting and becoming more resilient to ongoing virus curbs.

It’s a similar story in the UK where there was a significant lifting of lockdown restrictions earlier this month, propelling the flash composite PMI to the highest in more than seven years. The pound has been somewhat of a laggard in April as it’s lost some of its vaccine shine and there could be political troubles brewing as well. However, UK growth predictions are being revised up and as long as there are no unexpected setbacks on the virus or Brexit fronts, the pound could race to the top of the FX league again.

But today it was the Australian dollar that led the pack as it smashed through the tough resistance hurdle of $0.7760 to hit $0.7780. The kiwi was not far behind as it made its way back above the $0.72 level. A surge in metal prices is likely to be behind the aussie’s surge today amid a rally in the price of iron ore, which is Australia’s single biggest export.

The overall mood appeared to be only mildly positive on Monday, with the safe-haven yen mixed and gold up about 0.2%. A worsening Covid outbreak in India could be weighing on sentiment even as things are looking up in Europe and other countries that are either ahead or catching up in the vaccination race. Some caution ahead of the Bank of Japan policy decision tomorrow and the Fed the day after could also be a factor.

In equity markets, European shares opened mostly higher, shrugging off flat US futures and a mixed session in Asia.

The US earnings season will be heating up this week as all the big tech companies are scheduled to report their results, starting with Tesla today. The S&P 500 failed to close at a new all-time high on Friday after briefly flirting with record territory. Nevertheless, investors on Wall Street seem to have shaken off for now the threat of higher capital gains tax after taking a dive last week from Biden’s proposal.

Traders will mainly be preoccupied with the Fed and earnings announcements this week and there’s a good chance there won’t be any negative shocks from either. However, there’s also a flurry of US data coming up, including the advance GDP report on Thursday and the core PCE price index on Friday, which could easily send Treasury yields soaring if there are any upside surprises.