The Swiss franc has posted slight gains on Tuesday. In the North American session, USD/CHF is trading at 0.9126, up 0.18%.

Swiss consumer confidence improved to -7 in the April report, up from -15 points beforehand. This was the best reading since May 2020, and importantly, the index has recovered to its pre-Covid level of early 2020. The survey indicated that Swiss consumers are more likely to make major purchases and are more optimistic about economic conditions.

Switzerland will release CPI for April on Wednesday ( 6:30 GMT). Inflation remains at low levels, even with the economy showing improvement. The March CPI reading of 0.3% was the highest level in two years, and the consensus for April stands at 0.2%.

The Swiss franc has shown more volatility in recent months that is characteristic of the safe-haven currency. USD/CHF jumped 3.84% in March, its highest monthly gain since April 2018. However, the dollar proceeded to cough up most of these gains in April, as the US dollar retreated against most major currencies.

The Federal Reserve remains committed to an accommodative policy. At last week’s FOMC meeting, Fed Chair Powell stated that it was premature to talk about tapering, and on Monday he added that the economy was doing better but was “still not out of the woods”.

Powell’s unbending stance towards tapering is not uniform, however. On Friday, Fed Governor Robert Kaplan, who is not a voting member, made headlines when he publicly urged the Federal Reserve to have a conversation about tapering its asset-purchase program. If Friday’s nonfarm payroll print breaks the one million mark, the Fed may have to have that conversation sooner rather than later. 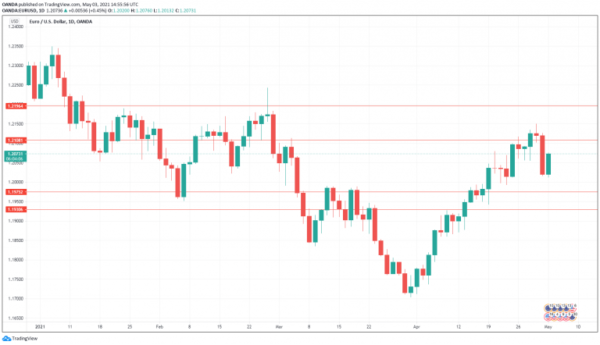