Stocks Bounce Back After Tech Rout

After a sharp sell-off yesterday, stock markets have bounced back. Actually, amidst the tech sell-off, there was late bounce in value stocks in the US, causing the Dow to close a tad higher. The benchmark stock index looks set to hit a new record when the cash markets re-open later. European markets have also bounced back, while crude oil continues to remain on the front-foot amid optimism over the re-opening of major economies and hopefully the end of the pandemic in the not-too-distant future. 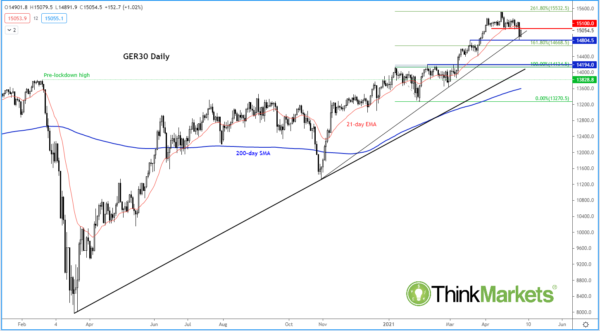 As I mentioned yesterday, I was not convinced there was going to be any real downside follow-through in the selling pressure. Rate hike speculations have repeatedly been dismissed by Jay Powell and it may be done so once again by the Fed Char, despite calls for tightening from outsiders, including now Yellen. What’s more, optimism over economic growth means the downside for stocks will probably be limited and not all sectors will be hurt, as banks and value stocks, which are not as stretched as most of the tech names, should find support when the economy starts to overheat a little. And even when the Fed and other central banks start tightening their belts, interest rates will still likely remain very low. Against this fundamental backdrop, any near-term weakness for the stock markets will probably be a buying opportunity rather than a reason for the bears to pounce. That’s exactly how the latest drop has turned out, as there was no immediate downside follow-through after yesterday’s selling.

In the longer term outlook, the rising commodity prices means inflation is likely to accelerate in the months ahead, but will it be sticky and not transitory? If that turns out to be the case then we may see a more rapid rate hiking cycle from the Fed and others, which should then cause the markets to drop.

That’s a topic for another day, but right now growth optimism is continuing to drive all risk assets higher.

Meanwhile, the focus will remain on the US economy as more macro data will be released shortly. After the disappointing ISM manufacturing PMI on Monday which showed employment in the sector fell in April, we will get more employment indicators today as the ADP private sector payrolls report and the employment component of the ISM Services PMI are released.

The weaker eurozone data caused the EUR/USD to again dip below the 1.20 handle, before bouncing back slightly. The euro could find fresh buying momentum in the event risk appetite remains strong heading into the US session.