The USD remained relatively stable near a two-week high level against a basket of its counterparts, while the market’s attention seems to focus on US employment data released today and tomorrow. It should be noted that yesterday the ADP employment figure for April rose substantially yet failed to meet the market’s expectations, while on the contrary April’s ISM PMI reading for the services sector outperformed market expectations. Also please bear in mind that surrounding USD’s fundamentals are also the tensions in the relationships between the US and China which may escalate further, given the recent G7 meeting. Also please note the recent tensions that arose between China and Australia. On the monetary front, Fed Officials continued to sound dovish and its characteristic that Chicago Fed President Evans stated that he expects the Fed’s monetary policy to remain loose despite the improved economic outlook and the swift recovery. We expect Fed officials to continue to sound dovish also given the bank’s loose monetary policy.

EUR/USD continued to have some bearish tendencies yet finds considerable support at the 1.1990 (S1) support line. For our current bearish outlook to change for a sideways movement bias, we would require the pair to clearly break the downward trendline characterizing the pair’s movement since the 29th of April. Should the market display a selling interest for the pair, we may see EUR/USD breaking the 1.1990 (S1) support line and aim for the 1.1905 (S2) support level. Should buyers have the advantage over the pair’s direction, we may see the pair aiming if not breaking the 1.2100 (R1) resistance line.

The pound remained relatively steady against the USD yesterday ahead of BoE’s interest rate decision and elections in Scotland, both today. BoE is widely expected to remain on hold keeping rates at 0.10% and currently GBP OIS imply a probability for such a scenario at 99.18%. Given the swift recovery of the UK economy after its reopening, especially in the services sector since mid-April, we may see the confidence of the bank getting a boost and in such a case the bank may slowdown the purchases of assets as the economy rebounds. Such a development could provide support for the GBP if also accompanied by more confidence while if the bank fails to meet the market’s expectations, we may see GBP weakening. Also on the pound’s fundamentals, we note the local elections taking place today, with special focus being on Scotland and should pro-independence parties win we may see the Scots asking for a second independence referendum. Please note that Johnson’s government had experienced considerable negative press headlines in the recent past and should it have an adverse effect in the election results, we may see the pound weakening.

Besides BoE’s interest rate decision today, we also highlight from Norway Norgesbank’s interest rate decision, while in Turkey CBRT is expected to remain on hold and on the Czech Republic CNB is also expected to keep rates unchanged. As for financial releases we note Germany’s industrial orders for March, Eurozone’s retail sales for April, UK’s services PMI reading for April and in the American session the US weekly initial jobless claims figure. Also, in tomorrow’s Asian session we note the release of China’s trade data. Calendar follows 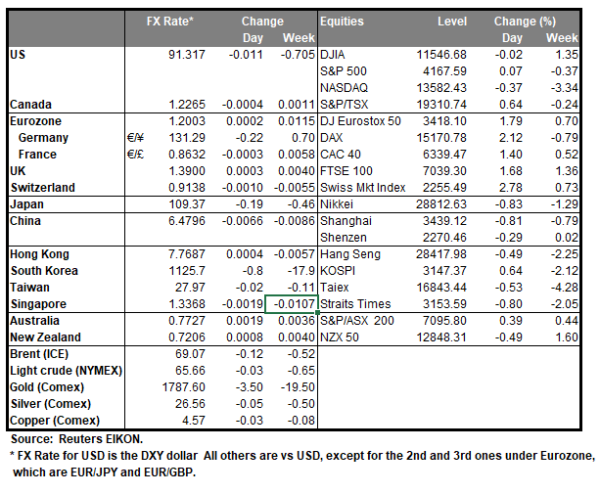 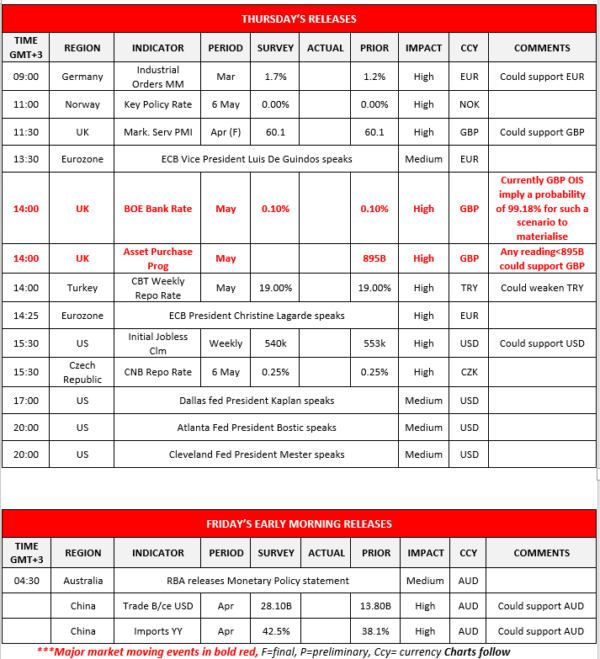