Loonie May Return To Losses After April’s Employment Report

The loonie has been enjoying a strong upside movement against the US dollar over the last month as investors are waiting for April’s employment report on Friday at 17:00 GMT. As the vaccine rollout continues, Ontario is planning to expand eligibility for coronavirus vaccines during May, with shipments increasing in the next weeks.

In the previous release, the unemployment rate in Canada decreased for the second straight month to 7.5% in March, reaching the lowest level since February 2020. However, the consensus for April is for the unemployment rate to rise to 7.8%, while I expect the economy to shed 175.0K jobs following an addition of 303.1K jobs in February, as fresh lockdowns were announced last month. In case the data shows a larger decline, the loonie could reverse lower versus the greenback. 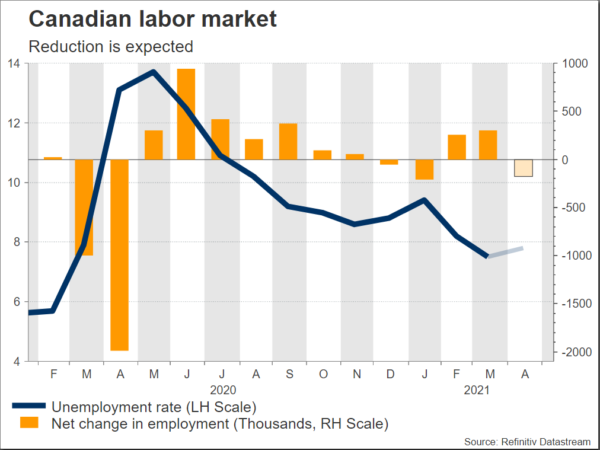 In the latest policy meeting, the Bank of Canada kept its key overnight rate steady at 0.25% and policymakers mentioned that in the first quarter of the current year the economic growth was stronger than January’s prediction. Moreover, the inflation rate is forecasted to rise around the 1-3% target range due to higher oil prices. The BoC is still expecting inflation to fall around 2% in the second half of the year and has begun to taper its QE program.

Turning to FX markets, dollar/loonie has been gradually falling over the last month, remaining near the more-than-three-year low of 1.2256.

If the employment report shows a weaker jobs growth and a higher unemployment rate, the pair could crawl up to test the 1.2365 immediate resistance, while additional advances from here could stabilize around the 1.2456 hurdle, which overlaps with the 20-day simple moving average (SMA). If buying interest persists, the 1.2645 barrier could come next in the spotlight ahead of 1.2750.

On the other hand, a stronger-than-expected jobs report could drive dollar/loonie towards the next target at 1.2060, registered in September 2017. Steeper decreases could see the test of the 1.1920 barrier, achieved in May 2015.

Furthermore, oil prices could help the commodity-dependent loonie gain ground as the WTI crude price is moving higher around $65.90/barrel. 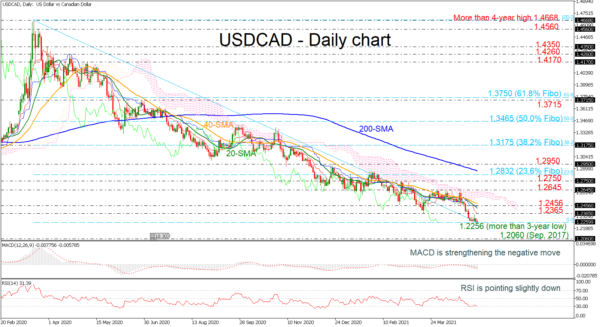