The euro is coming off a strong week, with gains of 1.19 per cent. EUR/USD soared on Friday with gains of 0.81%, buoyed by the poor performance for US nonfarm payrolls.

On the fundamental front, Germany releases ZEW Economic Sentiment on Tuesday (9:00 GMT). The indicator slowed to 70.6 in April, down from 76.6 beforehand. Analysts expect a rebound in May, with a consensus of 72.0. The eurozone indicator is also expected to improve to 68.0, up from the current level of 66.3 points.

The April nonfarm payroll report was expected to be a blowout. There were expectations that NFP would break above the one-million mark, and some analysts even projected a reading above the two-million mark. At the end of the day, however, the economy created just 266 thousand jobs, a massive miss of the forecast of 990 thousand. The unemployment rate rose to 6.1%, up from 5.8% and above the forecast of 6.0%.

Still, the news was not all bad, as wage growth rebounded with a strong gain of 0.7%, after a read of -0.1% beforehand. The US economy remains in good shape, and investors are unlikely to let a weak NFP report ruin optimism over the economy.

The Fed has maintained a dovish monetary stance, even with the US economy posting strong numbers. The disappointing nonfarm payroll report appears to have justified the Fed’s position, but investors will be keeping a close eye on the April inflation data, which will be released on Wednesday. A sharp rise in inflation could renew calls for the Fed to consider tapering. On the other hand, if the upcoming inflation numbers miss expectations, there will be less pressure on the Fed to change its accommodative policy. 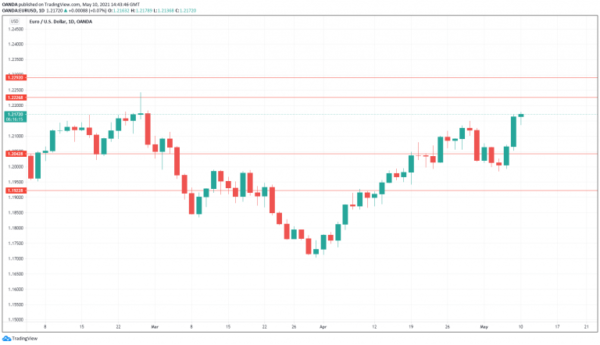