The pound received a lift from positive UK employment numbers, which were released earlier in the day. The unemployment rate for March dipped to 4.8%, down from 4.9% and a 6-month low. The number of unemployed persons in April fell by 15.1 thousand, outperforming the consensus of a rise of 25.6 thousand. This figure was all the more impressive given the recent lockdown. Wage growth slowed to 4.0%, down from 4.5%, but investors didn’t let this get in the way of positive sentiment towards the pound, which pushed into 1.42-territory

The surge in consumer inflation sent the dollar higher last week and has led to speculation that the Fed may have to reexamine its ultra-accommodative monetary policy. Fed member Robert Kaplan broke ranks with Fed Chair Jerome Powell earlier this month and urged the Fed to start to discuss tapering its USD120 billion per month in asset purchases sooner rather than later. Still, the Fed line remains that any inflation surge is temporary and there are no plans to taper QE anytime soon.

The Fed has long held that it would allow inflation to temporarily run above its target of 2 per cent. The key question is whether the April CPI numbers are a one-time blip or has inflation risen to a sustainable higher level. The market reaction to the CPI report was sharp, with equities falling and the US dollar gaining strength. Another release which points to higher inflation would again raise speculation that the Fed may have to tighten policy. This would be bullish for the US dollar. 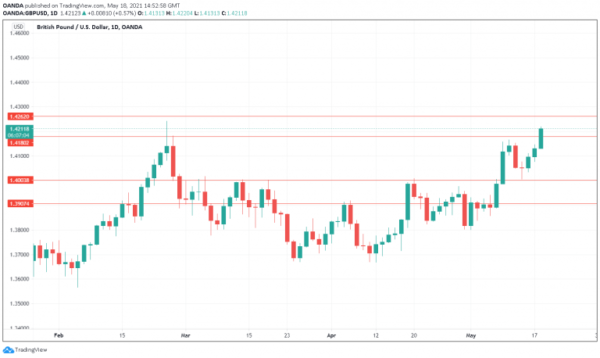