Yields Rise Ahead Of US Inflation Data, Pound Jumps On Rate Hike Hint 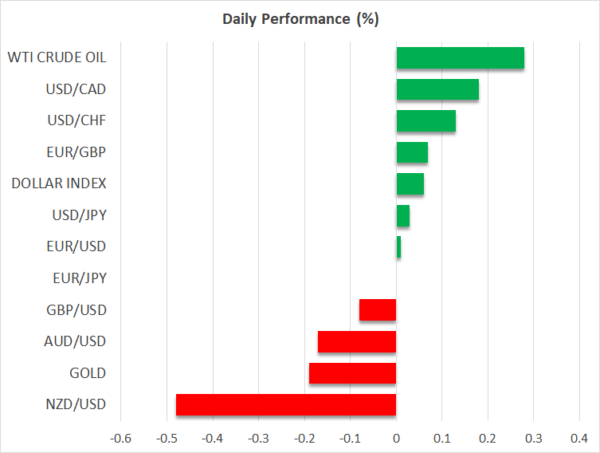 Bond yields perk up as big spending back in focus

US and global yields look set to end the week on a much firmer note than they started as the prospect of a massive federal budget in America lifted sentiment. The New York Times reported on Thursday that the Biden administration will submit a proposal for a $6 trillion budget for the fiscal year of 2022 as the Democrats seek to push through their agenda on infrastructure, environment, health and child care, among others.

In the meantime, bi-partisan talks on President Biden’s infrastructure plan are ongoing. The Republicans upped their party’s offer to $928 billion on Thursday, though this still falls short of the $1.7 trillion demanded by the Democrats. Biden has set the end of May as a soft deadline for the negotiations and if no agreement is reached, the Democrats could pass the bill using the budget reconciliation process. However, going down that route would probably require some concessions as well in order to satisfy some Democratic senators in the 50-50 split Senate.

With US debt on a sure path to balloon further over the next few years, there was some relief yesterday as the latest auction of 7-year Treasury notes was met with strong demand. Nevertheless, yields climbed sharply on Thursday and the 10-year yield has almost erased the slump from earlier in the week.

Aside from the potential boost to growth and the national debt from Biden’s spending plans, upbeat economic indicators also aided the rebound in yields. Initial jobless claims fell to a 14-month low of 406k in the week ending May 22, and although durable goods orders unexpectedly fell in April, core capital-goods orders – seen as a more accurate proxy for business spending than the volatile headline figure – jumped 2.3% m/m in April.

The spotlight will again be on US data later today when the latest PCE inflation figures are released. The core PCE price index – the Fed’s preferred inflation gauge – is expected to have surged to 2.9% y/y in April. The numbers on personal income and spending will also be closely watched.

The market view on how soon the Fed will begin to taper its asset purchases is now more closely aligned with that of Fed officials, who have made it clear they will look through a temporary burst of inflation. However, the Fed has also been signalling that discussions on tapering could start at one of the upcoming meetings, hence, any positive surprises in the incoming data could, at the very least, push Treasury yields towards the upper band of their recent range.

In equity markets, though, investors were focusing on the expected spending boost in the US and the somewhat stronger data of late, which helped the Dow Jones, comprised mostly of traditional stocks, close up 0.4% on Thursday. The S&P 500 could only manage a paltry gain of 0.1%, however, as tech stocks lagged again, weighed by higher yields.

US equity futures were pointing to a similar performance today, with Dow Jones futures leading the way. It was a solid start for stocks in Europe as well, but the positive risk tone was less clear in the major FX pairs.

The safe-haven Japanese yen firmed against many of its main peers. But this is likely to be due to some profit taking for yesterday’s big gainers such as the pound, aussie and kiwi, then any safety flows.

The US dollar also swum against the risk-on tide as it found strength in the move up in yields. The euro hovered around $1.22 and the kiwi slipped to $0.7260 today. There was some support for the loonie as oil prices rebounded sharply, with WTI futures approaching $67 a barrel.

But even the pound struggled to make much headway against the greenback today, having soared yesterday on the back of rate hike remarks. Sterling shot above $1.42 from a low of $1.4090 earlier in the day after Bank of England MPC member Gertjan Vlieghe said rates could begin to rise as early as the first half of 2022 if the labour market recovers quickly and unemployment doesn’t rise much when the government furlough programme ends at the end of September.

His comments on the rate path were the first by a BoE policymaker since the Bank’s decision at the May meeting to slow down bond purchases as others had not been so specific until now. The yield on 10-year gilts also surged but nevertheless, cable has stumbled once again at the $1.42 barrier. However, this could be more indicative of the latest dollar selloff coming to an end than pound strength waning. 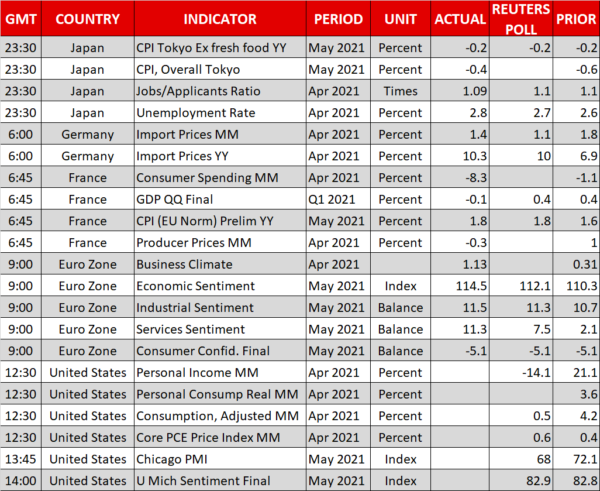