The British Pound declined heavily during the past few weeks and traded as low as 139.32 against the Japanese Yen. The GBP/JPY pair is currently recovering and might trade towards 141.70-142.00. 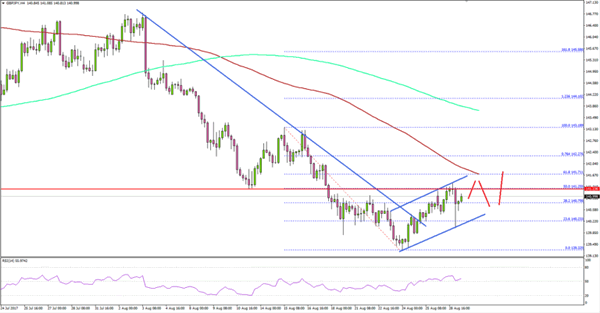 An ascending channel with support at 140.20 is forming, which could take the pair higher. On the upside, an initial hurdle is near the 50% Fib retracement level of the last decline from the 143.18 high to 139.32 low.

Furthermore, the number of unemployed persons in July 2017 were down by 120 thousand (5.9%) to 1.91 million compared with the same month a year ago.

Overall, there are chances of GBP/JPY moving higher towards 141.70 as long as the 140.20 support is intact.