Post-Brexit trade frictions between Britain and the European Union never completely went away but seemed to have flared up again lately. Unsurprisingly, the dispute is around the complicated Northern Ireland protocol, meaning the matter could drag on for months and potentially not be resolved without escalating into something much bigger first. If the spat leads to a tit-for-tat tariff war, it could hurt Britain’s economic recovery from the pandemic. But that’s not the only thing the pound needs to worry about as the currency faces a double whammy from rising Covid infections across the United Kingdom. Amidst these new headwinds, a more hawkish Bank of England could keep the GBP rally alive as taper speculation heats up.

Sterling’s had a strong run so far in 2021; it’s up around 3.5% against the US dollar and euro and almost 10% higher versus the yen. Those gains are astonishing considering that Britain entered the year in a tight lockdown, which lasted well into the Spring. However, endless shutdowns and soaring deaths from Covid weren’t foremost in investors’ minds. Instead, it was the UK government’s swift thinking on vaccines that caught markets’ attention.

The UK was the first Western country to begin a mass inoculation programme back in December and more than six months later, it’s still leading the big nations in the vaccination race. About 77% of the UK’s adult population have now received one dose of a Covid-19 vaccine, while more than 50% have had their second jab. The high vaccine uptake has been attributed to bringing the number of daily Covid deaths to the single digits. 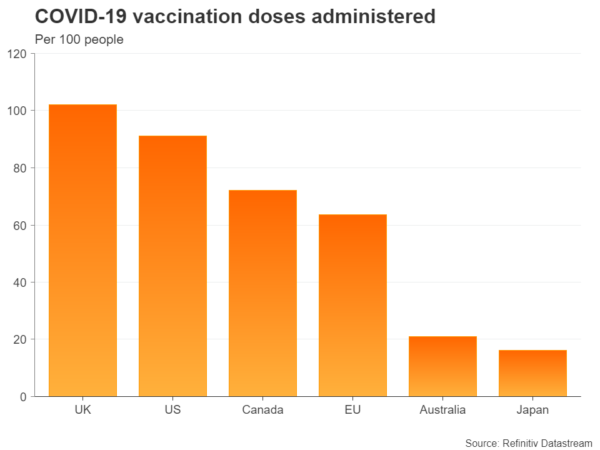 However, with the recent relaxation of most virus restrictions and the under-30s only now being offered a vaccine, it was inevitable that daily infections were going to rise again. But that’s not the main worry, rather, the reopening of the UK economy has coincided with the emergence of the Delta (Indian) variant. This new strain, which is thought to be 50% more transmissible than the Kent variant, is already spreading rapidly in many parts of the country and hospital admissions have started to increase for the first time in months. 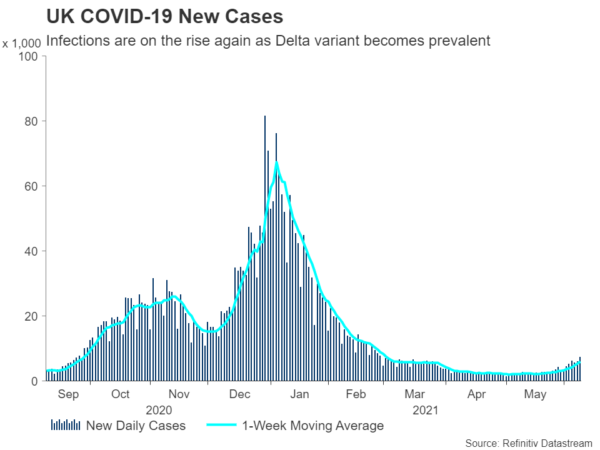 This unwelcome trend will likely force the government to postpone the final lifting of all virus curbs that were planned for June 21. Although such a delay won’t have huge economic implications as the key sectors of the economy are already open, it would nevertheless make it hard for a full recovery to be achieved this year as the return of local lockdowns can’t be ruled out, while international travel restrictions look set to stay in place for the foreseeable future.

Adding to the doubts about the UK’s economic prospects in the coming months is renewed tensions between London and Brussels over Northern Ireland trade policies. The rushed Withdrawal Agreement and subsequent Trade and Cooperation Agreement are causing major headaches for businesses in Northern Ireland that rely on imports from mainland Britain. As part of the deal, Northern Ireland remained within the EU single market when the Brexit transition period ended on December 31, 2020, creating a de facto border along the Irish Sea and making trade with the rest of the UK more complex.

The two sides had agreed to grace periods before the new customs checks come into force to give businesses time to adapt. However, with the grace periods about to expire at the end of the month, the Johnson government is considering unilaterally extending them, arguing that businesses are still unprepared as well as in the hope that simpler customs rules can be negotiated in the interim. Without a compromise, it would no longer be possible for certain exports such as chilled meats to Northern Ireland to continue, hence why the row has been dubbed as the ‘sausage war’.

How dangerous can the ‘sausage war’ get?

But Brussels isn’t happy with the UK’s stance and is not only threatening legal action but targeted tariffs on some goods as well. The G7 meeting this weekend will be an opportunity for the UK, French and German leaders to soothe some of the tension. Otherwise, there is a real risk that this escalates into a major dispute and potentially turn into a tariff war between the UK and EU.

Prime Minister Johnson’s record suggests he is unlikely to cave into European demands very readily. Likewise, the EU does not want to give Britain an easy ride in their post-Brexit relationship. Thus, all the ingredients are there for this conflict to be a long drawn out one. The question is, how serious would it have to get before investors take notice?

Bank of England front and centre for GBP traders

As far as the markets are concerned, the UK economy is on the verge of rip-roaring growth as vaccinations have paved the way for a full reopening and sounded the death knell for lockdowns. At its last meeting, the Bank of England signalled a slower pace of weekly bond purchases as the recovery takes hold, putting it a step closer to a formal taper announcement. 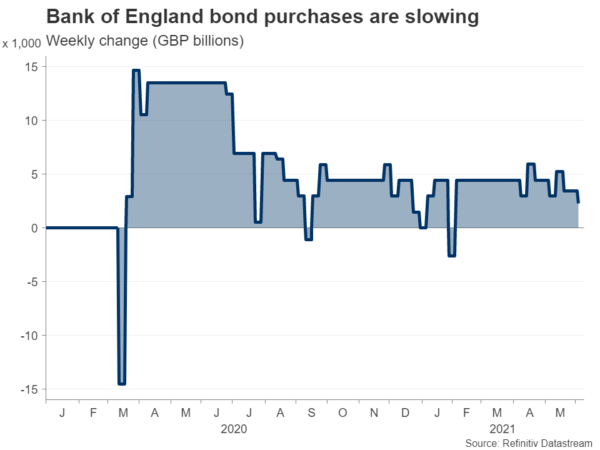 Many traders see the BoE as already being on a tapering path as the rhetoric coming from policymakers lately indicate that it’s only a matter of time before an exit strategy is laid out. Speculation about how soon the Bank will wind down its asset purchases has added much needed impetus to cable’s rally, which had stalled in March and April. However, the recently brushed 3-year top of $1.4248 was not much higher than the February peak and conquering the $1.4200-$1.4250 resistance zone is proving challenging.

Pound uptrend may not be sustainable

Expectations about US monetary policy have a strong hand to play in this, but the pound’s uptrend against the euro is also looking shaky. The EU is quickly catching up with its vaccine rollout and the Eurozone economy could soon enjoy an equally robust rebound as the UK. It’s not too surprising therefore to see euro/pound’s descent flatlining since March.

The technical picture against the yen remains fairly bullish, though the Japanese currency is down against all its major peers this year. So it’s probably safe to deduce that the pound’s upside was weakening even before these new risks started to emerge. 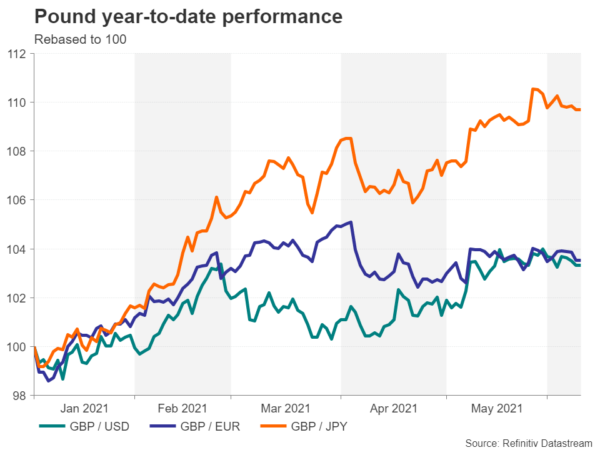 Looking ahead, the next leg of the pound rally will likely evolve around the timing of the first BoE rate hike, which should become clearer at one of the upcoming meetings when policymakers will have to decide whether to extend the QE programme beyond the end of 2021. However, there’s still plenty that can go wrong before the year-end as both the surge in infections and the row with the EU could hamper Britain’s recovery.

Although it’s right to argue that the high inoculation rate should keep the virus under wraps and the UK and EU will work something out over Northern Ireland as they usually do, markets have priced in nothing but super-charged growth for the next few quarters so anything that falls short of ‘rip-roaring’ might come as a bit of disappointment.