Bitcoin rose sharply on Sunday evening after Elon Musk said that the company would accept the cryptocurrency when more miners shift to clean energy. He said that transactions will only be possible if there is a confirmation of 50% clean energy usage by miners. In the past, some reports have found that about 75% of all Bitcoin miners use some form of clean energy. Looking ahead, this week, cryptocurrencies will be affected by the Federal Reserve statement. Bitcoin rose above the psychological level of $39,000 while Ether rose to $2,500. According to CoinMarketCap, the total market value of all cryptocurrencies rose by 7% in the past 24 hours.

The US dollar was little changed during the Asian session as investors refocused on the upcoming Federal Reserve meeting. The bank will start its monthly meeting on Tuesday and publish its decision on Wednesday. With the labour market tightening, and with inflation at a multi-year high, analysts will be watching for the term transitory in the Fed statement. In the past, the Fed has insisted that it will not start tightening since the current trends have been transitory. Therefore, if it changes tone, it could have an impact on the US dollar.

The economic calendar will be relatively muted today. The key economic numbers to watch will be the Switzerland producer price index (PPI). Analysts expect the data to show that factory-gate prices rose in May as the cost of raw materials increased. In Europe, Eurostat will publish the latest industrial production data while in Canada, the statistics agency will deliver the manufacturing sales data. Traders will also focus on a key speech by Andrew Bailey, the Bank of England governor.

The BTCUSD pair spiked to the psychological level of 39,000 overnight. This is a notable level of resistance since the pair has struggled moving above it for a while. It managed to move above the pink descending trendline. Also, the pair’s 25-day and 15-day moving averages have made a bullish crossover while the Relative Strength Index (RSI) is approaching the overbought level. It also moved above the 23.6% Fibonacci retracement level. Therefore, a more sustained bullish trend will be confirmed if the price manages to move above 40,000. 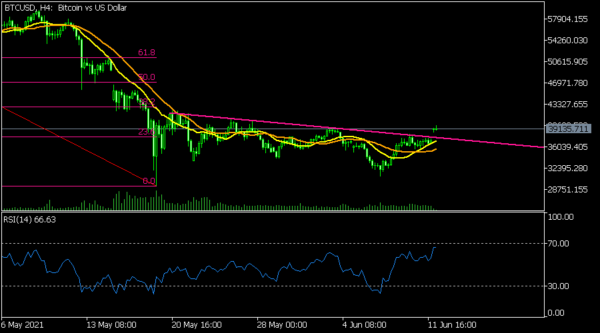 The ETHUSD pair rose to an intraday high of 2,500 during the overnight session. On the four-hour chart, the pair seems to be forming a symmetrical triangle pattern. It is also slightly below the 25-day moving average while the Relative Strength Index (RSI) has moved to 50. The pair seems to be forming an extended bearish pennant pattern. Therefore, there is a possibility that it will bounce lower later this week. 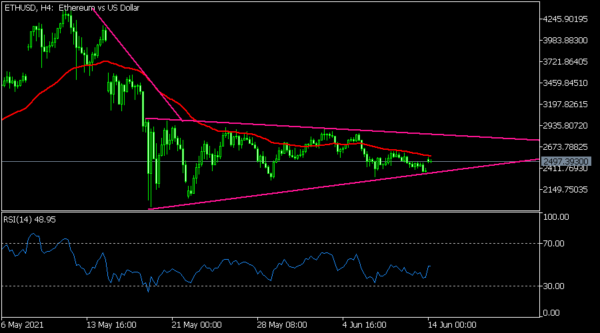 The EURUSD pair was little changed after it dropped sharply on Friday. It is trading at the psychological level of 1.2100, which is slightly below the 23.6% Fibonacci retracement level. It has also formed a descending channel that is shown in pink. Also, the pair has moved below the 25-day moving average while the Relative Strength Index (RSI) dropped to the oversold level of 30. Therefore, the pair may keep falling as bears target the 38.2% retracement level at 1.2052. 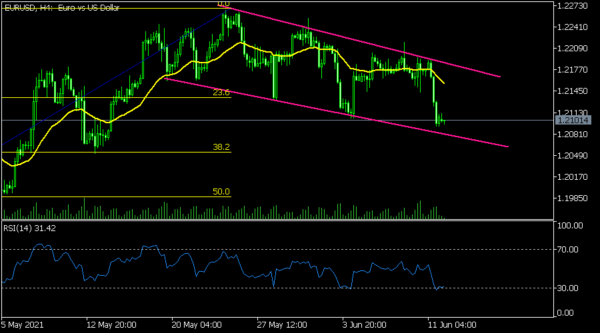