As widely expected, the Federal Open Market Committee (FOMC) made no substantive policy changes at it meeting today. By unanimous vote the Committee decided to maintain its target range for the fed funds rate between 0.00% and 0.25% and to keep its monthly purchase rate of Treasury securities and mortgage-backed securities (MBS) unchanged at $80 billion and $40 billion, respectively.

But that is not to say that the meeting was inconsequential. Indeed, the Committee made some changes in its Summary of Economic Projections (SEP), which contains the forecasts that the FOMC releases on a quarterly basis. Notably, Committee members boosted their expectation for real GDP growth this year, with the median projection up half a percentage point to 7.0% from 6.5% in March. Inflation projections also moved up for 2021, increasing a full percentage point to 3.4% from 2.4% previously (Figure 1). Although the Committee’s median GDP growth projections for 2022 and 2023 were unchanged, slight increases in participants’ assessment of future inflation pushed the median projection for the core inflation rate up a tick in 2022 and 2023. In short, most members believe that the higher inflation rates that the economy is experiencing now will prove to be largely “transitory.” However, a majority of FOMC members see the risks to the inflation forecast as skewed to the upside. 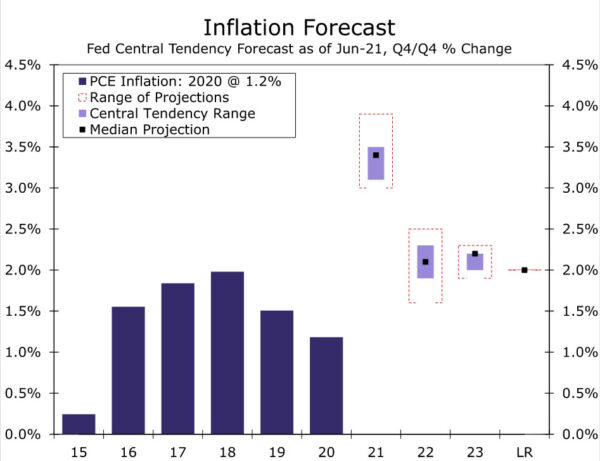 But Expectations of Future Tightening Were Brought Forward

These forecast changes led to some important changes in the so-called “dot plot” (Figure 2). In March, only 4 of the 18 FOMC members expected that the fed funds rate would be higher at the end of 2022. The dot plot that was released at the conclusion of today’s meeting shows that 7 members now expect rates to be higher by the end of next year. The number of FOMC members expecting rates to be higher at the end of 2023 shifted up from 7 in March to 13 at present. This shift pushed the median projection for the fed funds rate at the end of 2023 up to 0.6% from 0.1% in March. In short, expectations of future policy tightening among FOMC members were brought forward. Like the median FOMC member, we expect that the Committee will refrain from raising rates before the end of 2022. But rate hikes sometime in 2023 now look increasingly likely. 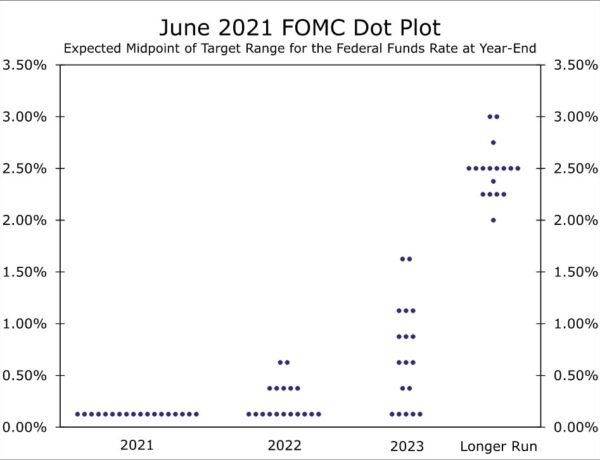 As noted above, the statement emphasized that the Fed will continue to buy assets at the current monthly rates. But market participants are increasingly focused on the timing of an eventual “tapering” of asset purchases. We will need to await the minutes of today’s meeting, which will be released on July 7, to ascertain how much discussion occurred at today’s meeting regarding the timing of “tapering.” In our view, Fed policymakers likely will signal in late summer or early August that tapering is nearing. Long-term interest rates likely will grind higher as market expectations of tapering ramp up.

In a technical adjustment, the Committee raised the rate that the Federal Reserve pays to commercial banks on the reserves that they hold at the central bank, the so-called IOER rate, to 0.15% from 0.10%. In a related move, the Committee also raised the rate on its reverse repurchase agreement facility to 0.05% from 0.00%. But these moves should not be interpreted as monetary tightening. Due to ample liquidity in the financial system, short-term interest rates having been hovering just above 0% for some time. For example, the yield on the one-month T-bill has been essentially 0% since mid-March. The adjustments that the FOMC made today are intended to provide better functioning to money markets, not as a signal that the Committee is poised to tighten monetary policy.