Action Forex
HomeContributorsFundamental AnalysisBoE: Will We See A Hawkish Surprise?

BoE: Will We See A Hawkish Surprise?

The Bank of England’s policy decision is due later at 12:00 London time. The key question is: Will the UK central bank follow in the hawkish footsteps of the Fed? We could see a sharp move higher in the pound if it does, especially against currencies where the central bank is expected to remain dovish longer such as the Japanese yen, Swiss franc or the euro.

Let’s be clear, no changes are expected to be made in monetary policy and it is possible the meeting could be uneventful. However, in light of the rising inflationary pressures at home and abroad, the key risk is if more monetary policy committee (MPC) members join the outgoing Chief Economist Andy Haldane in dissenting. Additionally, the MPC might signal its intention to taper QE and raise interest rates sooner than expected, given the speedy administration of Covid vaccines and rising inflation.

So, who could potentially join Haldane in voting for tapering QE? If it is anyone, it could be Gertjan Vlieghe, who has said that a rate hike could be on the cards in late 2022. However, Vlieghe is also leaving at the end of August. This means that the votes from the core MPC members Ramsden, Broadbent and Cunliffe will be more important. These members are known doves.

On the inflation front, CPI has risen above the Bank’s 2% target to 2.1%. With input costs rising in recent months, owing to the higher commodity prices, some of the price pressures will be passed onto the consumer. This means that inflation is likely to rise further in the months ahead. However, fears over runaway inflation are not present at the moment.

Like the Fed, the BoE will try to keep the economy recovering while limiting inflation and speculation about policy tightening. This is going to be a tough task, which means the BoE will choose its policy wording very carefully at this meeting. It is likely that the BoE will raise the spectre of upside risks to their current inflation forecasts, but counter this with the transitory narrative.

One reason why any MPC member may want to hold off from dissenting is the fact the full reopening of the economy has been delayed due to the rising levels of the more infectious Delta variant of Covid-19.

Another reason why the BoE will not be in a hurry to signal sooner-than-expected tightening is the fact there is a lot of uncertainty regarding employment once the furlough scheme ends in September.

So, don’t be surprised to see a cautiously optimistic policy statement today. The MPC will likely re-iterate that it will maintain its current policy in place until there is more evidence that significant progress has been made towards closing the output gap and achieving 2% inflation sustainably.

Ahead of the BoE policy decision, keep an eye on the GBP/JPY. Overall, the bullish trend remains intact for this pair, but rates look a little overbought. If the BoE turns out to be more hawkish than expected then look for a potential breakout on the GBP/JPY above resistance circa 155.00 where a bearish trend line meets old support. However, a dovish BoE could see rates dip back down to 153.75 or possibly lower. 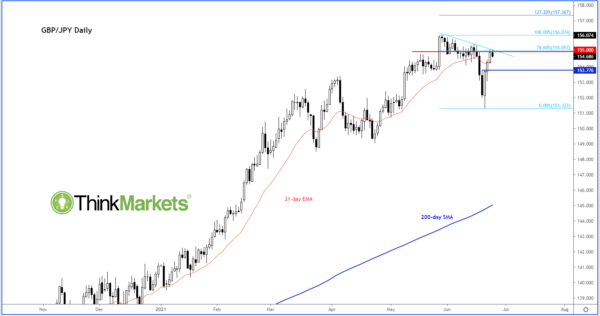