Has the Canadian Dollar Already Reached its Peak for the Year?

A spike in the loonie undercuts the competitiveness of Canada’s exports and encourages consumption of imports over domestic production. But households and businesses benefit from cheaper imports of consumer and capital goods. Overall, we believe strengthening global growth, particularly in the US, will support Canada’s export sector. Other economic headwinds—including labour shortages and supply-chain bottlenecks—are bigger concerns for exporters right now than the value of the Canadian dollar.

After tumbling early in the pandemic, the Canadian dollar went on its strongest run in more than a decade, rising to a six-year high of 83 US cents in early June. The run-up made it the best-performing advanced-economy currency through the first five months of 2021. 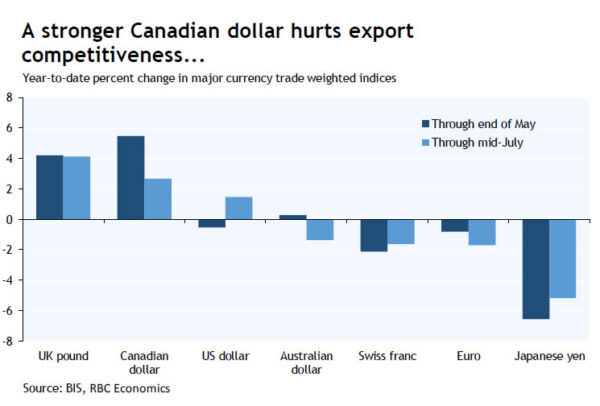 A stronger Canadian dollar helps business looking to invest by making imported machinery and equipment cheaper. Canada’s industrial M&E imports were 12% above pre-pandemic levels in May when adjusted for inflation. A stronger dollar also makes imports cheaper and has blunted the inflationary impact of rising input costs and higher goods prices. Prices of imported consumer goods (excluding autos) were down 3% year-over-year in May versus a 1% increase in the US. A stronger Canadian dollar is bad news for exporters, particularly those in manufacturing and services sectors that aren’t benefiting (and may be suffering) from higher commodity prices that have boosted the currency.

Over the past six weeks the Canadian dollar has reversed some of its earlier gains, falling below 80 US cents. 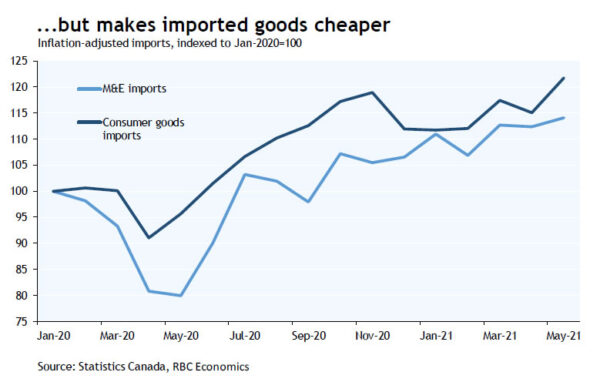 Some of the factors behind the loonie’s impressive run are now, conversely, contributing to its softening. A key one: commodity prices. WTI oil has risen from around US$40 per barrel in the second half of last year to more than US$70. Non-energy commodity prices were up 25% year-to-date in May. We expect oil prices to remain in their recent range into 2022, acting as neither a tailwind nor a headwind for the Canadian dollar. Meanwhile, some non-energy commodity prices have started to turn lower (lumber being one example), and could fall further as supply responds, and reopening-driven growth expectations top out.

Canada’s central bank still stands out as relatively hawkish (more likely to raise interest rates) but some of its peers are starting to catch up. The prospect of higher rates attracted investors to the Canadian dollar, but a change in tone from the Fed in June (it’s also evaluating a reduction in QE and indicated rates could rise in 2023, if not sooner) has supported the US dollar at the Canadian dollar’s expense. This process likely hasn’t fully played out—we think the market is overpricing rate hikes in Canada next year, and underestimating the odds of a move by the Fed. But more convergence will be Canadian dollar-negative.

Investor appetite for riskier assets—from equities to currencies like the Canadian dollar—remains robust. But concerns that this cycle’s best growth rates (for both GDP and corporate earnings) will soon be behind us could make further stock-market gains harder to come by. RBC’s US equity strategist sees the S&P 500 ending this year close to its current level. Waning risk appetite could put downward pressure on the Canadian dollar.

The Canadian dollar’s highs are likely in the rearview mirror. We see it remaining within range of the 80 US cent level over the second half of this year and weakening slightly in 2022. Upside (higher oil prices, a persistently dovish Fed) and downside risks (less investor risk appetite) remain, so a relatively flat forecast doesn’t exclude some volatility along the way.

At its current level Canadian exporters might think the Canadian dollar is still too high, but it’s within the range of estimates of fair value—and a long way from above-parity levels that a decade ago sparked fears of Dutch disease (collateral damage to manufacturing or other domestic industries from a high currency tied to a strong resources sector). Even with steady currency appreciation over much of the past year, Canada’s exports and imports were roughly balanced through the first five months of 2021.

We think strong foreign demand, particularly in the US, will more than offset any headwind from a higher Canadian dollar. Export Development Canada’s Trade Confidence Index hit a 20-year high in the second quarter on improving export sales and better global economic conditions. If anything, labour and input shortages are likely bigger headaches for Canadian exporters.

Canadian consumers are likely already taking advantage of a relative decline in US consumer goods prices through online shopping. International travel (Canadians normally spend more abroad than foreign visitors do in Canada) will also be a bit more attractive than it was pre-pandemic.