Boris Johnson lifted the final coronavirus curbs on Monday after a four-week delay, but the rising Covid infections made investors see the glass half empty, pressing the pound to a five-month low. UK retail sales for June and July’s flash Markit/CIPS PMI figures could challenge the sell-off on Friday at 06:00 GMT and 08:30 GMT respectively as the case of monetary tightening seems to be gaining traction again in the UK.

The fast spread of the delta covid variant and the evolution of additional mutated strains worldwide pushed traders towards safe havens, causing a 2.0% damage in pound/yen and a 1.8% decline in pound/dollar.

The fact that the UK government has snapped social distancing and mask wearing restrictions despite infections shooting up to reach January’s levels, put the economy at a relatively worst position in investors’ eyes. Still, the low hospitalization and death rates are currently a ray of hope that the removal of lockdowns could be irreversible and an opportunity for the economy to absorb the pandemic slack.

The new concern that arises at this point, however, is that economic growth has likely reached its speed limit, with high inflation measures, and the reversal in cyclical stocks making this scenario more real recently. Probably the softness in Friday’s data may not be enough to dampen market sentiment yet, though the stats could shed some light to these thoughts, showing a significant slowdown in retail sales from 24.6% y/y to 9.6% in June  – but still remaining well above pre-pandemic levels because of base effects.

A few hours later, the flash Markit/CIPS PMIs for the month of July could also reflect some normalization from previous booming months, with the manufacturing index easing to 62.5 from 63.9 and the services sector, which drives growth in the UK economy, pulling to 62.00 from 62.4 before. 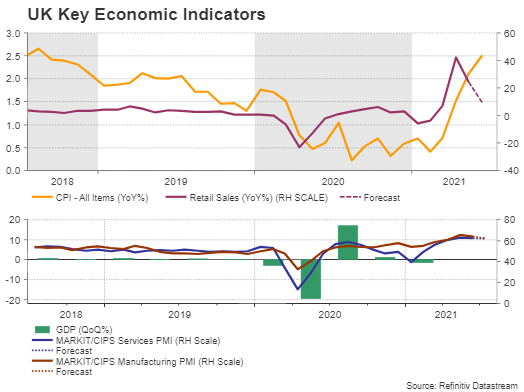 Divisions widen within Bank of England

As regards the impact on the pound, investors could become more sensitive to data releases as surging infections are a threat to the economic recovery and the next Bank of England meeting, which will include fresh economic projections, is in two-weeks time from now on August 5.

Back in May, BoE chief Andrew Bailey attempted to convince investors that the latest reduction of bond purchases was not a tapering action, while during the previous policy meeting, the Bank messaged that it “does not intend to tighten monetary policy at least until there is clear evidence that significant progress is being made in eliminating spare capacity and achieving the 2% inflation target sustainably”.

More recently, however, comments from policymakers revealed divisions within the board, with Saunders arguing that government bond purchases may need to stop early because of an unexpectedly sharp rise in inflation measures. A few days later Haskel opposed that statement, saying that reducing stimulus is not the right option for the foreseeable future, despite rising inflation.

Hence, with the confusion growing larger about the Bank’s policy intentions and inflation jumping above the target to peak at 2.5%, investors may look at the data for direction before the BoE policy meeting.

Given the uncertainty around economic growth, a sharper-than-expected pullback in the data could add legs to the pound’s sell-off, sending pound/dollar below the 1.3625 support area and towards the 1.3500 psychological level.

On the other hand, the impressive expansion observed in the data during the first quarter may take a while to re-emerge, making any middle-of-the-road outcome less exciting to react. Hence, unless a heavy beat in forecasts raises the odds for bond tapering, there is some doubt about whether any moderate upside surprise could help pound/dollar run above the key 1.3800 resistance.