The British pound has started the new trading week with strong gains. Currently, GBP/USD is trading at 1.3824, down 0.60% on the day. It was a roller-coaster week for the pound, which fell into 1.35-territory early in the week, but managed to recover these losses and ended the week almost unchanged.

The UK releases CBI Realized Sales for July on Tuesday (10:00 GMT). This important gauge of the retail sector has rebounded strongly – after a reading of -45 in March, the index came in at +25 in June. Another strong reading is expected, with a consensus of +21 points.

Last week ended on a sour note, as UK PMIs slowed considerably in July. Services PMI fell to 57.8, down from 62.4, while Manufacturing PMI came in at 60.4, down from 63.9. Both PMIs slipped to 4-month lows and were short of the consensus. Still, the pound’s reaction to the PMI reports was muted, as investors took the softer figures in stride. Both manufacturing and services are performing well, as the PMIs remain well into expansionary territory. The neutral 50-level separates contraction from expansion.

The world is watching as the UK takes part in Boris Johnson’s great Covid experiment. Last week’s decision to lift health restrictions on bars and restaurants was admittedly a risky one, but the Johnson government insists that with a majority of adults immunized, Covid levels can be kept under control in a reopened economy. The British Medical Association has rejected this view, saying that the unfettered reopening of the economy has “potentially devastating consequences”. Any rise in Covid cases due to the removal of the restrictions could result in severe restrictions being reimposed, which would curb economic growth. 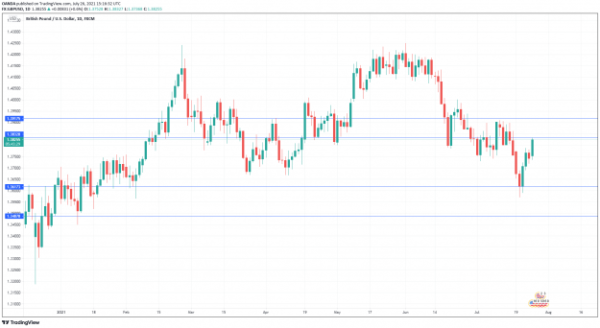