The US dollar rose slightly after relatively weak GDP data. The numbers showed that the American economy grew at a lower pace than expected. It rose by 6.5% in the second quarter, lower than the expected 8.5%. It was just a modest improvement from the 6.3% in the first quarter. Still, this growth propelled the US economy above pre-pandemic levels for the first time since the pandemic started. The main lagged was residential investments and inventories, which were caused by labour shortages and supply chain disruptions. The currency will react to the latest US purchaser consumption expenditure (PCE), which is the Fed’s favourite inflation tool.

US stocks retreated slightly even after strong results from tech giants like Apple, Facebook, and Amazon. The main topic was Robinhood, whose shares became publicly traded for the first time yesterday. The firm’s stock declined by more than 8% as investors questioned the company’s valuation. The company ended the day being valued at more than $29 billion, which was still higher than the $11 billion that private investors had valued the firm. The weakness was also likely because of the regulatory concerns about the company and the fact that it allocated its stock to traders in its platform.

The Japanese yen tilted upwards after the latest industrial and jobs data from the country. According to the Ministry of Finance, the country’s unemployment rate improved from 3.0% in May to 2.9% in June. At the same time, its jobs to applications ratio rose from 1.09 to 1.13. Meanwhile, its industrial production rose by 6.2% in June while retail sales rose by 0.1%. These numbers show that the Japanese economy is doing relatively well. Later today, the top numbers to watch will be the flash Eurozone inflation data, Canada GDP numbers, and Norwegian employment figures.

The USDJPY rose slightly to 109.52, which was slightly higher than this week’s low of 109.34. On the three-hour chart, the pair was still below this week’s high of 110.55. It is slightly below the 25-day and 150-day moving averages while the MACD and the Moving Average of Oscillator have moved below the neutral line. Therefore, the pair will likely maintain a bearish momentum as bears target the next key support at 109.05. 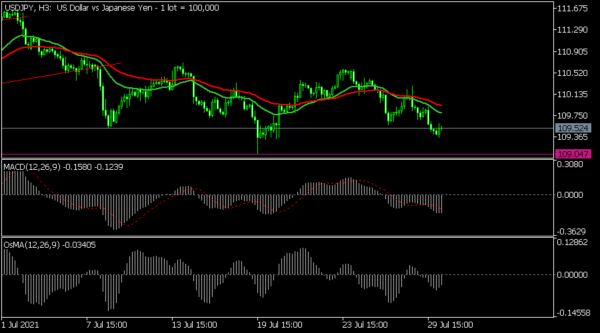 The EURUSD pair rose to an intraday high of 1.1890, which was the highest level since July 13. On the 4 hour chart, the pair moved above the upper side of the falling wedge pattern. It is also along the upper side of the Bollinger Bands while the Relative Strength Index (RSI) kept rising. The MACD is also above the neutral level. Therefore, the pair will likely maintain the bullish momentum. 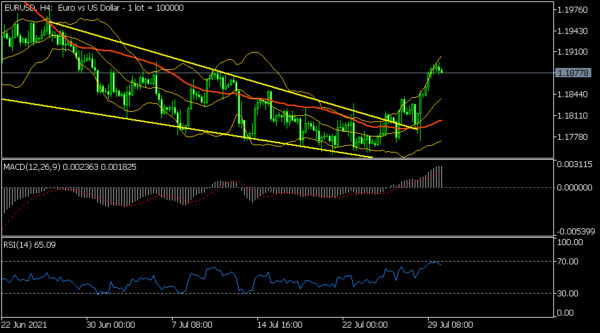 The USD/CAD pair declined to 1.2430, which was the lowest level since July 16. On the four-hour chart, the pair moved below the 15-day and 25-day moving averages. It is also approaching the 50% Fibonacci retracement level while the RSI has moved to the oversold level. Therefore, the pair will likely continue as bears target the next key level at 1.2350. 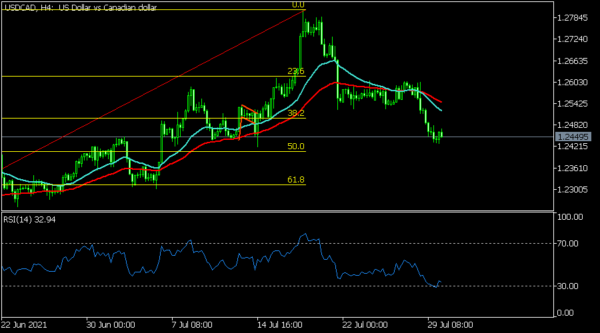