Yesterday’s second quarter GDP report sure was an interesting read. Growth disappointed (6.5% vs. 8.4% expected) as the American consumer’s splurge wasn’t quite enough to meet the lofty expectations for the expansion. However, despite the miss on headline growth, healthy domestic demand persists and is laying a solid foundation for the second half of the year.

The good news starts with noting that total economic activity has surpassed pre-pandemic levels. In fact, real GDP is now only 1.7% below the CBO’s estimates of the full productive capacity of the economy. For a point of reference, after the recession ended in 2009 it took five and a half years (and a downward revision to estimates of potential GDP) to make up this much ground. 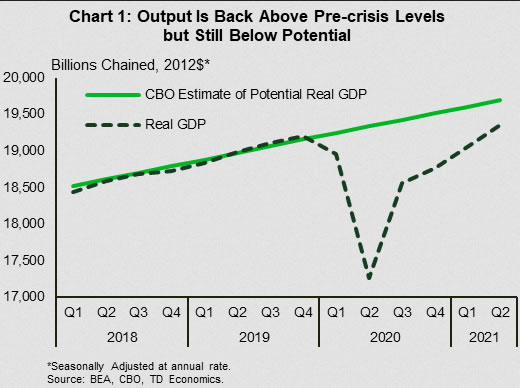 The strength is coming from domestic demand. U.S. households are flush with cash and deployed a chunk of it in the second quarter, drawing down personal savings by $526 billion.

Going forward, the storyline worth keeping an eye on is what that money is being spent on. Consumers have yet to reorient their expenditures back to pre-pandemic patterns. Since the outset of the crisis money has flowed to goods purchases, while services spending was down to 64.8% of the pie in the second quarter (from a peak of 69%).

Though June’s data shows that services expenditures are ticking back up (now $1.87 per dollar spent on goods) the fact that consumers are taking their time adjusting their spending back to “normal” could present quandary for policymakers. Supply chains have struggled to meet demand for goods, and with the ongoing difficulty of emerging markets to control the pandemic (along with China’s commitment to stamp out any COVID cases as they come up) near-term relief isn’t on the radar. The longer it takes to reorient the consumption basket, the longer pressure will be sustained on supply chains and consumer price inflation will struggle to moderate. 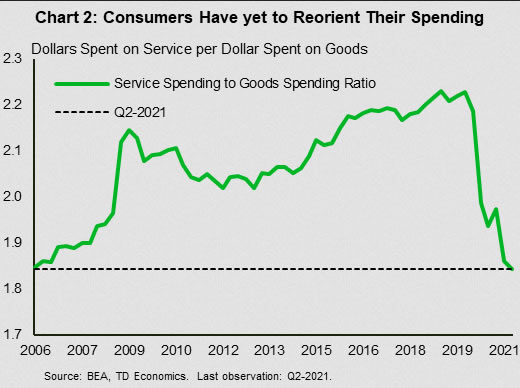 The issue goes beyond inflation though, as supply chain problems are also constraining output. The second quarter GDP report featured economy-wide inventory drawdowns that were the largest outside of a recession since the 1940s. The automotive sector (and the semiconductor shortages that hampered producers’ ability to meet demand) made up roughly 60% of the decline in nonfarm inventories, but the issues are more pervasive. The reduction in stockpiles was responsible for more than half of the miss on growth for the quarter.

Despite the current challenges the outlook remains bright. A reorientation to services spending will allow inventory to rebuild in the balance of the year by focusing demand away from capacity constrained sectors and towards those with slack. The sooner this happens, the sooner we can expect consumer prices to moderate. Moreover, the large drawdown in inventories provides a hedge against future shocks as producers can use lulls in demand to rebuild depleted stockpiles.

Canada has so far been able to avoid the spike in new cases linked to the Delta variant seen in jurisdictions like the U.K. and parts of the U.S. where vaccination uptake has been low. And, with new cases remaining low, the stage is set for a heated summertime performance for the economy. Just this week, Statistics Canada estimated that real GDP advanced 0.7% month-on-month in June (after dropping by an average of 0.4% in April and May), boosted by re-openings as well as the construction and mining, oil and gas sectors. This is the first in what will hopefully be several solid advances. In this regard, higher frequency data is signaling so far, so good in July (Chart 1). 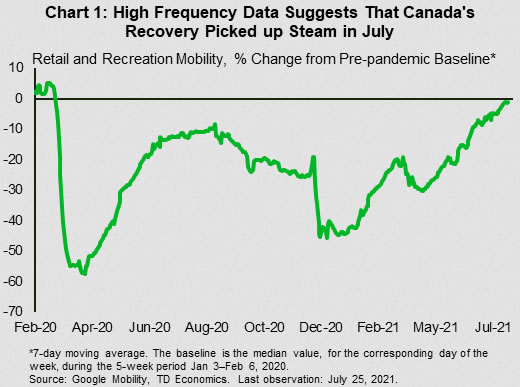 Of course, Canada is not an island to itself, and Delta risks still loom large. New cases have been grinding higher in recent weeks, with the latest 7-day average at its highest level since late June. An outbreak in B.C.’s Central Okanagan region was even declared this week, forcing the re-imposition of some restrictions in response. These measures include tighter rules governing mask wearing, discouraging non-essential travel into the area, increased scrutiny for businesses where COVID-19 cases have occurred (with the potential for temporary closures), and enhanced social distancing measures at places where people gather, like bars and nightclubs.

A few important developments to note about B.C.’s experience: one, restrictions were localized to one region, two, public health measures were a drop in the bucket compared to those seen earlier in the pandemic and three, officials have suggested that broad-based provincial actions are no longer required. Notably, B.C. has maintained a relatively loose stance on restrictions throughout the pandemic and cases there are still very low. With vaccinations weakening the link between cases and hospitalizations, it will be interesting to see if other provincial governments maintain a similar, lighter-touch, potentially more gradual approach to restrictions. In Alberta, the government has gone even further, announcing this week that it will no longer require people who test positive for COVID-19 to self-isolate, will stop routine testing for mild symptoms and will no longer require mask-wearing in schools come September.

Inflation is an especially important topic these days, and CPI reports have come increasingly under the microscope. However, June’s report (released this week) showed that Canadian inflation pressures cooled a little during the month. Year-on-year inflation was 3.1%, down from 3.4% in May, on slower growth in clothing, recreation, food and transportation prices.

While this is a modest, yet welcome reprieve, note that the Bank of Canada’s core inflation measures were unchanged in June, and price pressures are likely to rise in the months ahead reflecting re-openings and supply chain strains. Inflation expectations are the channel through which “transitory” inflation pressures could be longer lasting. So far, they remain mostly well contained (Chart 2), though this is a key risk to inflation and the outlook for monetary policy.