The Swiss franc enjoyed a strong week, as the US dollar declined significantly against the majors. USD/CHF has fallen close to the symbolic 90-level, as it is currently trading at 0.9044. Just how bad did the US dollar perform last week? USD/CHF fell 1.46%, its worst weekly showing since April.

The dollar managed to rally on Friday and the dollar index rose to 92.09 on Friday. However, the dollar index has dipped below the 92 level on Monday and is currently at 0.9197. A break of either 91.50 or 92.60 which signal a major directional move; in the meantime, we could be in for a week of choppy range trading.

The week ended with key US inflation numbers for June, which came in lower than expected. The Core PCE Price Index, the Fed’s preferred inflation indicator, rose 0.4% MoM (0.6% est.) and 3.5% YoY (3.7% est). The surge in inflation hasn’t boosted the US dollar, as the Fed has consistently poured cold water on any expectations of a hike in interest rates anytime soon in order to curb inflation.

The markets have bought into the Fed script that the rise in inflation is temporary, but if inflation remains at low levels, this sales pitch to the markets will become increasingly difficult. The PCE price index is running at 4% annually, while CPI is even higher. Both have easily overshot the Fed inflation target of 2%, and upcoming inflation reports will be closely monitored by the markets and the Fed.

In Switzerland, the KOF Economic Barometer slowed for a second straight month, from 133.3 to 129.8. The reading was within expectations. The index remains above the long-term average, but the May reading of 143.2 may have been a peak that the economy cannot sustain. 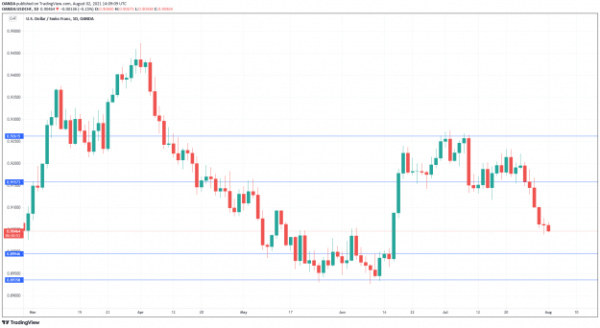