CPI: A Win for Team Transitory, But Persistent Fans Not Leaving Empty-Handed

The Consumer Price Index (CPI) rose a more-modest 0.5% in July, which kept the year-ago rate steady at 5.4%. The details of the report favored the view that the recent degree of inflation will not last, as prices in categories most closely associated with the economy’s reopening and supply constraints have begun to ease. However, there was also evidence that price pressures continue to broaden out, which should keep the heat turned up on inflation for a while. 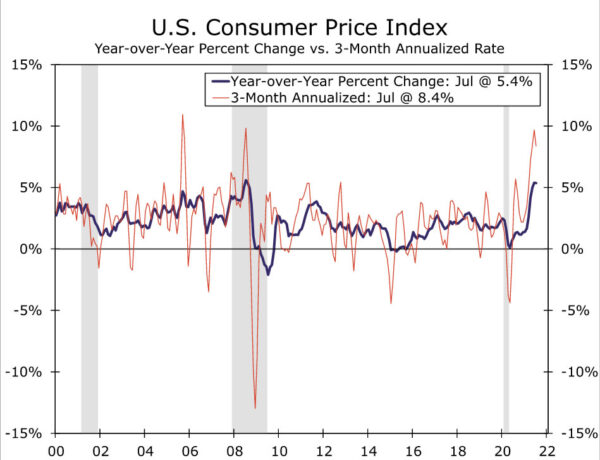 More Moderate Gain in Prices as Frictions Begin to Ease

Consumer prices rose 0.5% in July, cooling from June’s scorcher of a 0.9% gain. The moderation is a sign that the most acute frictions associated with the economy’s reopening are beginning to ease. However, the transition is far from over yet and price pressures have broadened out, which should keep inflation running noticeably above the Fed’s target for a while.

The smaller rise in prices in July can be traced in part to a marked slowdown in used car prices. Used car prices were essentially unchanged (+0.2%) after increasing 7% or more and accounting for at least one-third of the headline’s gain in each of the prior three months. Prices for new cars, however, got another big lift (+1.7%), as the used car market is not offering the affordable alternatives it once used to and inventories remain exceptionally low.

In another sign of inflation easing a bit as the reopening process moves further along, prices for travel-related services, which have been another out-sized contributor of late, also cooled slightly in July. Most of the break came from a drop in car rental prices (-4.6%), but airfares were virtually flat last month. With prices for hotels back above pre-pandemic levels and renewed concerns around COVID, we expect further moderation in these categories ahead. Dampened expectations for growth due to the Delta wave are already weighing on oil prices. Gasoline prices rose 2.4% in July, but are likely to give back some ground over the next month or two in light of the recent drop in oil prices. 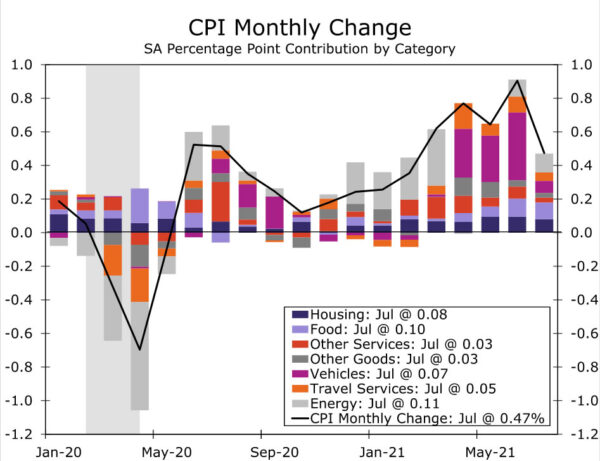 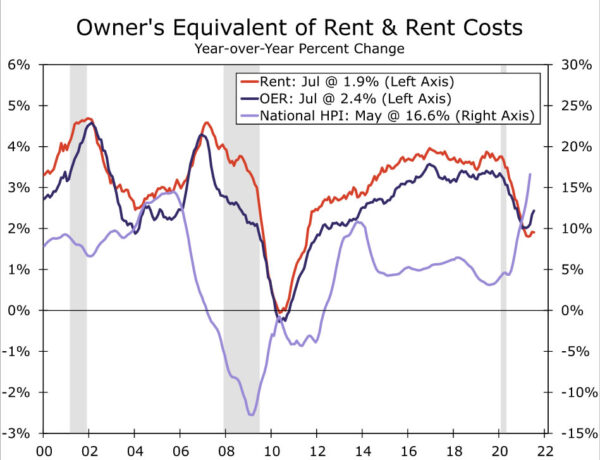 Recent strength in prices is not likely to prove so fleeting elsewhere, however. Owners’ equivalent rent (OER), which accounts for 24% of the headline index, rose 0.3% again in July. The series has finally begun to reflect the sharp rise in home prices since the pandemic. With OER lagging sale prices by roughly a year and a half and the inertia in this category, we expect shelter costs to be an increasing source of inflation ahead. Rental costs slowed a bit, increasing 0.16%, but we do not expect the softness to persist given recent market measures of rents and the sharp rise in employment and wages.

Price pressure continues to broaden beyond categories most acutely associated with the reopening, as businesses are finding it easier to pass costs on today than they typically could this early in an expansion. Core goods prices excluding used autos are up 3.6% over the past year, the fastest pace since the early 1990s. The fact that firms are facing higher costs in the form of physical inputs and labor, suggests even as supply constraints eventually ease wages could keep pressure on consumer prices for some time to come. Wage pressure has been most evident in food prices recently, as restaurant owners contend with the highest prices of food-related commodities in a decade and average hourly earnings over the past three months have surged 23% at an annualized rate, as labor has been hard to come by. Prices of food away from home rose 0.8% in July, accounting for 17% of the gain in the headline index last month. 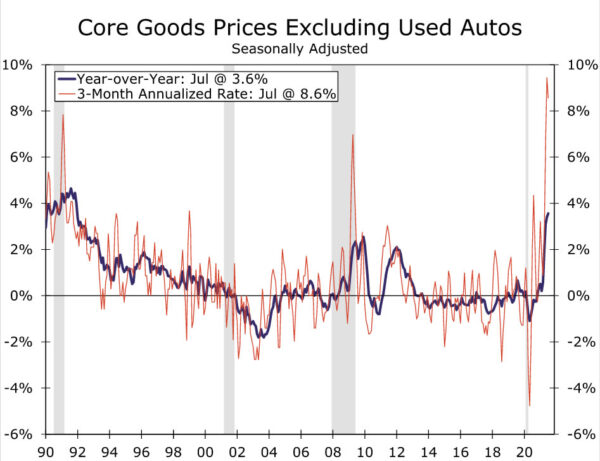 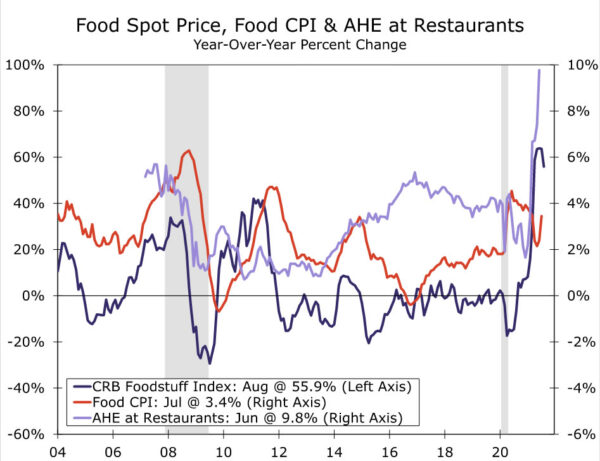 Edge to Team Transitory, but Something for Everyone

Today’s report is a win for Team Transitory, but Team Persistent is not walking away empty-handed. For Transitory fans, the muted change in used cars and weaker gain in travel services illustrates that as supply improves, demand moderates and the reopening matures, price growth will ease up. But the Persistent fans can point to the strong gains among shelter and core goods as an indication that inflation is not about to quietly fade away. As our Pressure Gauge shows, supply logjams are far from clear. Until transportation costs ease up and inventories are replenished, there will be little relief for inflation. Without a marked pickup in productivity, stronger wages will also exert upward pressure on inflation until labor constraints ease. We expect headline CPI to remain around a year-ago pace of 5% through Q1 of next year.

The increasingly long period of above-target inflation no doubt has some Fed officials getting increasingly uncomfortable with the current stance of policy. However, others, including Chair Powell, have not wavered in the view that price growth will eventually cool off. This group will take comfort from today’s report in addition to inflation expectations remaining well-within their historic range. While FOMC members seem to agree that the inflation portion of their “substantial further progress” criteria for tapering has been met, the fact that inflation expectations remain fairly well-behaved gives them some time to get on the same page about the labor market.