Appetite For Risk Improves Ahead Of Jackson Hole

Risk sentiment has turned positive at the start of the new week with stocks and US index futures rising slightly, crude oil rebounding 3.5% and copper rallying. In FX, the dollar gained against the safe-haven Japanese yen but fell against risk-sensitive commodity dollars. Meanwhile cryptocurrencies gained further ground with Bitcoin topping 50K. It remains to be seen whether the appetite for risk will remain positive as we head deeper into the week. 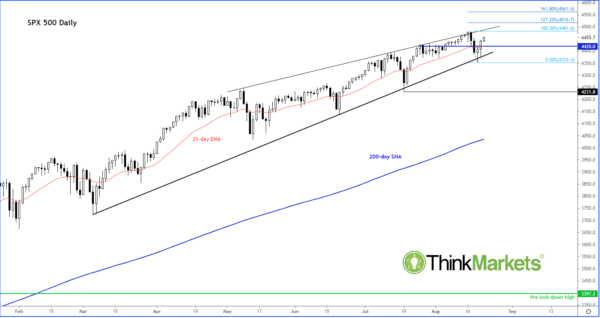 Last week, sentiment had turned a bit sour with the big falls in commodity prices. Investors were concerned that demand for crude oil and copper will be weaker than expected this year, owing to a resurgent coronavirus, with the delta variant proving to be more infectious and resilient than expected. The virus is spreading fast across the US, with hospitalisation and deaths climbing. On top of this, the dollar rallied on speculation the Federal Reserve was getting closer to taper its asset purchases. And to make the situation even worse, the latest macro data from China wasn’t great either as we found out at the start of the week, raising concerns that the world’s largest consumer of copper and many other commodities, is struggling to sustain its recovery. The soft US retail sales report we saw last week underscores the impact of the Delta variant, while Friday’s unexpected drop in UK July sales (-2.5%) could be a sign that the recovery is slowing down here, too. But as mentioned, all those concerns were put aside at the start of this week with risk assets rebounding. The key question is whether the recovery will last.

All eyes and ears on Jackson Hole Symposium (Friday)

One of the most eagerly-anticipated events – the Jackson Hole conference – is taking place on Thursday. But instead of a three-day-in-person meeting, it is now going to be a virtual event, which probably means the Fed is unlikely to kick off any major pivot in the tapering narrative in light of the recent upsurge in Delta cases and hospitalisations. Previously, analysts had expected Powell and co to spill the beans on tapering timeline.

If Powell signals the Fed will maintain status quo in the upcoming policy meetings, then the stock market bears may decide to stay largely on the side lines. The greenback may fall, and this could support gold. For most other commodities, which are sensitive to concerns about demand or supply dynamics, will likely remain subdued – unless Delta cases fall back sharply. Otherwise, as there is always the risk we may see more restrictions, or the current restrictions being extended, Monday’s recovery may not last very long for crude oil and copper. So, the impact of the Fed on commodities that are sensitive to the economy will be limited.

Still, judging by the latest communication from the Fed, it looks the US central bank is planning to pull back the pace of its monthly bond purchases before the end of the year, although “some” members – according to the minutes of the FOMC’s July meeting – prefer to wait until early in 2022 to start tapering. With inflation surging in recent months, the economy has already reached and surpassed its goal on inflation, and the Fed is “close to being satisfied” with the progress of jobs growth.

So, it is still possible Fed Chair Jay Powell may provide us with a rough timeline of its tapering process this week, although this would now come as surprise. Otherwise, the focus will quickly turn to the September meeting, when we will also have the updated economic and interest rate projections from the Fed. Either way, we are very close to finding out what the Fed’s next plans are.

But with the dollar already rising in anticipation of tapering, the greenback may not rise too much if the Fed does indeed inform us of its plans in the coming weeks. Indeed, policymakers at the Fed have been very clear about one thing: that tapering of QE purchases does not necessarily mean an imminent rate hike. For that to happen, the Fed will want to see “substantial further progress” in employment, something which the Fed does not feel has been achieved yet. Indeed, officials want to complete tapering of asset purchases first, before starting a hiking cycle.

Looking ahead to the other macro events for this week, they will all play second fiddle to the Jackson Hole event. We have already had the latest European manufacturing and services PMIs this morning, but they failed to ignite much volatility. Eurozone services PMI edged lower to 59.7 from 59.8, more or less in line with expectations. UK services PMI unexpectedly dropped to 55.5 from 59.6, yet this was also shrugged off in terms of initial reaction as the nation’s manufacturing PMI beat expectations. US PMIs are due later along with Existing Home Sales.

Looking ahead, we will have more data from the US. Sentiment will be shaky after the recent sell-off in some key commodity prices such as crude oil and copper that was triggered, at least in part, by anxiety about the economic impact of the coronavirus spread and global supply chains. Last week, the number of Americans filing for initial jobless claims fell to 348K, the lowest level since the pandemic began, reflecting the steady progress in employment and economic recovery in general. Further improvement in the labour market could hasten the Fed’s policy normalisation processes and support the dollar. On Thursday, we will find out how the economy performed for in the second quarter. GDP will be the second estimate, after the “advance” estimate revealed the world’s largest economy had grown by 6.4%. Unless we see a sizeable revision, the market won’t be paying too much attention to what is backward-looking data. Instead, the focus will be on what’s to come the next – Jackson Hole (see above).

Finally, the last day of the week will see the release of US Core PCE Price Index; Personal Income and Spending, and UoM’s revised Consumer Sentiment and Inflation Expectations surveys. Among these, the PCE Price Index is going to be the most important given it is the Fed’s favourite measure of inflation. Now how much of a reaction we will get from Friday’s data releases will be dependent on what Fed Chairman Powell will have said at the Jackson Hole symposium regarding tapering on Wednesday. For example, if he chooses not to provide the timeline for tapering and says the Fed is waiting for the release of more data, then it will be logical to expect more of a reaction from the data releases.