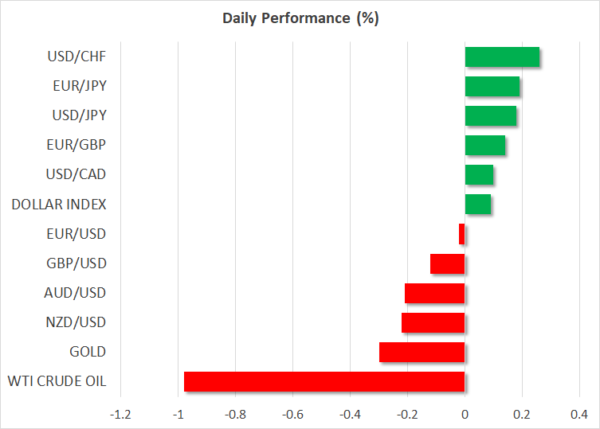 Rising virus cases in Asia as well as lingering concerns about China’s punitive crackdown on its tech industry came back to haunt markets on Thursday, pulling regional stocks lower. European bourses also slipped at the open and US stock futures struggled too, indicating Wall Street won’t be able to repeat its run of record closes.

The S&P 500 posted its second straight day of an all-time high on Wednesday and the Nasdaq indices their third. But while it is the fast-spreading Delta variant and uncertainty about Chinese regulation that are causing angst in Asia, elsewhere, it’s more likely the general caution ahead of Chair Powell’s keynote address tomorrow at the Fed’s Jackson Hole symposium that’s taken the wind out of stock markets’ sails.

There’s been a lot of mixed messages lately not only on the policy front from the Fed but also about how severe the economic impact will be from the worsening Delta outbreak around the world. Early signs that the Delta wave in the United States may have knocked both consumer and business confidence in August have significantly tempered expectations that the Fed will communicate a taper timeframe at its annual gathering at Jackson Hole, which was changed to a virtual event at the last minute for the second year running.

Spotlight on Powell despite low expectations

Powell is due to speak tomorrow but is unlikely to satisfy investors seeking answers about when and how the Federal Reserve will unwind its massive monthly asset purchases. The cloudier outlook due to the Delta variant means the Fed will almost certainly want to wait for the August jobs report before finalising a decision on tapering and unless the US economy were to slow quite substantially, Powell will probably aim for a November announcement.

The problem is, markets may have set their expectations too low about any surprises on Friday, but at the same time, traders are looking at the Jackson Hole for some badly-needed direction, hence, there’s a risk that something Powell says might be blown out of proportion, sparking a lot of volatility.

Bond markets already appear to be bracing for some action. The yield on 10-year Treasury notes has edged up to a two-week high. A series of Treasury auctions this week could be contributing to the rise in yields, as well as the improvement in risk sentiment, but some of the upward pressure could be down to speculation that the Fed will cite further progress towards its criteria for tapering.

Dollar crawls higher amid some risk-off

Firmer Treasury yields are likely propping up the US dollar, which fell back yesterday after a strong start but is now crawling higher again. The dollar index was last quoted up 0.15%, pressuring its peers.

A mostly stronger Japanese yen suggests there are some risk-off trades at play that could also be aiding the greenback today. The Australian and New Zealand dollars were the worst performers as the two countries remain gripped by stringent lockdowns with virus cases still rising.

The euro was down slightly at $1.1760 ahead of the publication of the ECB accounts of the July policy meeting. The only other major release later today is the second estimate of US GDP for the second quarter.