Canadian GDP in the Spotlight

Economic growth data from Canada will hit the markets at 12:30 GMT Tuesday. The numbers will tell us how the economy performed coming out of the spring lockdowns. As for the loonie, the big picture seems bright as the Bank of Canada continues its taper mission, although a lot will depend on oil prices and the upcoming election.

When Canada does vaccinations, it does them right. The nation started out slow but it still managed to overtake every major country to become the leader in the vaccination race. Coupled with tremendous government spending and a sharp comeback in oil prices, this has allowed the economy to stage a phenomenal recovery.

So phenomenal that the Bank of Canada has already started to slash its asset purchases. In fact, the BoC’s own forecasts suggest that interest rates will be raised ‘sometime in the second half of 2022’. 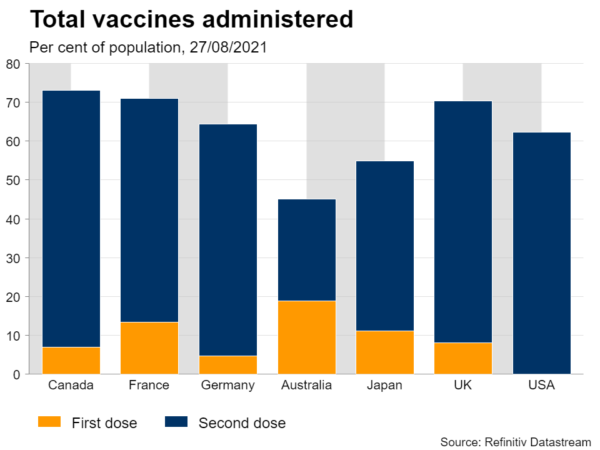 That said, all this optimism is unlikely to be reflected in the upcoming data. The numbers capture the second quarter, a period when the economy was mostly shut down. Restrictions started to be rolled back in June, so this data will be heavily distorted.

The economy is forecast to have grown by an annualized rate of 2.5% in the second quarter, with a sharp recovery in June more than offsetting contractions during both April and May. Nevertheless, markets will likely see this particular dataset as being outdated.

Turning to the Canadian dollar, the outlook seems positive. The economy is strong, the BoC is ahead of almost every major central bank right now in the normalization game, and some benefits from the supermassive US spending packages could spill over across the border.

Of course, the loonie isn’t driven only by economic fundamentals. In recent weeks, it has been entirely at the hands of oil prices and stock market movements. It’s a commodity-linked currency after all, so risk sentiment in the markets is one of the most crucial variables. 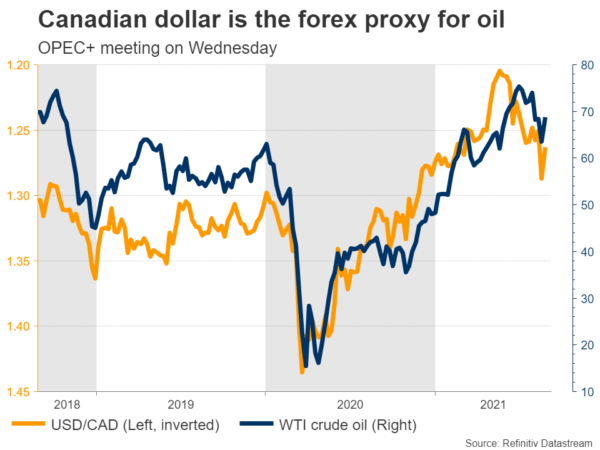 Beyond the economy and risk appetite, the other element that could shake the loonie is the federal election that’s scheduled for September 20. Prime Minister Trudeau is looking to strengthen his grip on power by capitalizing on the nation’s vaccination success. Opinion polls currently show Trudeau’s Liberals being neck-and-neck with the Conservatives.

Election uncertainty might keep the loonie in check for now, but ultimately, the revival of carry trades could help the currency gain momentum. A carry trade is when investors borrow in a low-yielding currency to invest that money in higher-yielding currencies abroad and bank a profit on the difference.

With the BoC preparing to raise rates but other major players like the European Central Bank and the Bank of Japan not following suit, interest rate differentials could begin to widen in the loonie’s benefit, allowing it to outshine the euro and yen over time.

Taking a technical look at loonie/yen, initial resistance to any advances could come from the 87.50 zone. If violated, the next target for the bulls would be the 50-day moving average (MA) currently around 87.90, ahead of the 88.45 region.

If the bears retake control and manage to pierce back below 86.55, the 200-day MA could provide some support ahead of the 85.40 area.

Finally, note that there’s also an OPEC+ meeting scheduled for Wednesday, which could rattle oil prices and by extension the loonie as well.