The Bank of Canada will wrap up its latest meeting at 14:00 GMT Wednesday. Some disappointing economic data coupled with the election later this month will likely keep the central bank on the sidelines. As for the loonie, a patient BoC and rising political uncertainty could make for some choppy trading, but the big picture remains promising. The nation’s jobs data for August will also be released at 12:30 GMT Friday.

The Bank of Canada is unlikely to disturb the waters this week. Overall, the economy is in good shape. Vaccinations have been impressive, the jobs market has almost recovered all its pandemic losses, inflation is way above target, and oil prices remain elevated.

As such, the Bank has already started the normalization process. It slashed its asset purchases significantly in recent meetings, with the weekly pace reduced to just 40% of what it was earlier, and its own forecasts suggest it will raise interest rates next year. 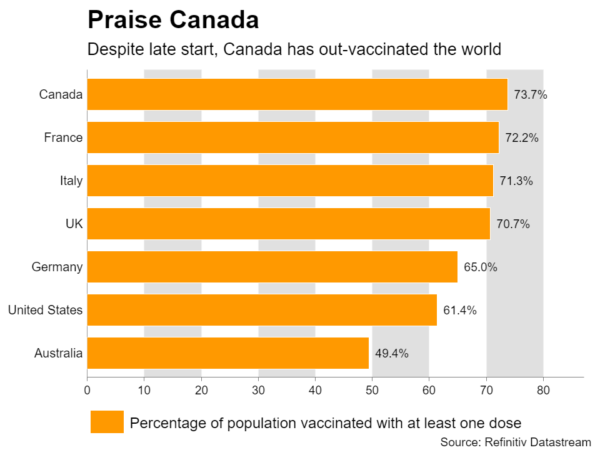 However, policymakers will probably wait before taking the next step. The economy contracted in Q2, when lockdowns were in effect, and some early signs suggest there wasn’t much momentum entering July either. A slower data pulse coupled with the upcoming election should be enough to keep the BoC sidelined for now.

While the BoC could strike a slightly more cautious tone this week, it won’t abandon its taper plans. This is one of the smaller meetings without updated economic forecasts or a press conference, so the real decisions about the QE program will be taken at the next gathering in October.

If economic data strengthen by then, there’s a strong chance the BoC cuts its asset purchases again. Beyond purely economic considerations, there are also financial stability risks to consider as the nation’s housing market is already on fire. Policymakers don’t want to keep the stimulus around for too long, fearful of inflating a housing bubble.

But whether the BoC pushes the taper button again in October will ultimately depend on the upcoming employment report. Forecasts suggest another 100k jobs have been recovered, which would push the unemployment rate down another two ticks to 7.3%. 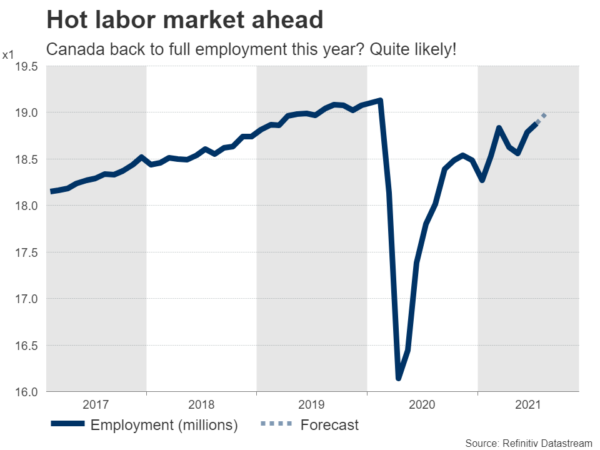 If that jobs number is met, it would leave the Canadian economy some 150k jobs away from a full labor market recovery. That means a return to full employment is on the cards this year, strengthening the case for the BoC to stay on the normalization path.

Turning to the Canadian dollar, the big picture remains encouraging, supported by the highest vaccination rate among developed countries and a BoC that will probably raise rates several years ahead of central banks in Europe or Japan.

That said, any real strength in the loonie might have to wait. The BoC is unlikely to commit to anything this week, leaving the markets guessing about its next move, and the upcoming election on September 20 also carries considerable uncertainty.

Prime Minister Trudeau was looking to strengthen his grip on power by securing a bigger majority when he called early elections, but his polling lead has all but evaporated and he is currently neck-and-neck with the Conservatives. It’s questionable whether he will even secure a minority government.

The best scenario for the loonie would probably be another Trudeau victory. That way, government spending would remain generous in an environment of tighter monetary policy, which is a great cocktail for a currency. A Conservative victory could see the loonie take a hit, but it wouldn’t really change the broader positive outlook as any spending cuts are far away.

Taking a technical look at loonie/yen, if the BoC strikes a cautious tone or the jobs numbers disappoint, the pair could fall back below the 87.50 zone and head towards 86.55.

On the other hand, if the longer-term fundamental story dominates, the market could edge higher to test the 88.45 area. A violation would turn the focus to the 90.20 region.